By Jeff Dayton-Johnson
April 11, 2006
Sign in to view read count 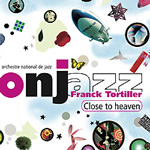 Some readers might recall, fondly or otherwise, Dread Zeppelin, a band with at least one too many gimmicks: fronted by an Elvis impersonator, they performed reggae versions of Led Zeppelin songs (in place of the drum solo on "Moby Dick," the Elvis stand-in read aloud from the novel Moby Dick). One is tempted to approach a new album of big band renditions of Zeppelin material (by l'Orchestre National de Jazz, no less) in the same vein: as a novelty record.

Such an assessment would be grossly incorrect. Indeed, what this new recording by France's National Jazz Orchestra evokes most strongly is Gil Evans's orchestrations of Jimi Hendrix songs; there's the same big, brassy jazz chords over a rock and roll beat. The record doesn't necessarily evoke Zep itself. There is no guitar, no Robert Plant-like vocals (though Patrice Héral provides kind of bizarre but not unpleasant vocal accents here and there). The drumming is more likely to recall the taut funkiness of The Bad Plus than the lumbering behemoth that was Zep drummer John Bonham: "Black Dog" is positively spritely. (There are exceptions; some passages in "Dazed and Confused" are definitely Bonzo-like.)

In a recent interview with Jazz Magazine (France), ONJ leader and vibes-player Franck Tortiller claims to feel the most kinship with Zep bassist John Paul Jones, which is telling. Among the Zeppelin band members, Jones was the least visible but in many ways the most responsible for the overall sonic experience of Zep that attracts these jazz musicians.

And these are some very good musicians. Trombonist Jean-Louis Pommier in particular is a delightful and fluent player, gleefully navigating difficult lines on "Black Dog." Trumpeter Jean Gobinet recalls the bright, rhythmically sure-footed energy of Roy Hargrove. The composition of the band is a little unusual, with two vibraphonists and two drummers, plus Héral scatting and Xavier Garcia discreetly injecting samples, all in addition to a very tight brass section plus Eric Séva's Steve Coleman-like saxophones; this adds up to a quirky but crisp and amiable sound mix.

But, as is fitting on a big band record, Tortiller's arrangements are the big draw. Fittingly again, the loving detail rendered unto "Stairway to Heaven," that most totemic of Zep tunes, may be the most rewarding. Ten minutes of "Stairway" are preceded by two original preludes, one for vibraphones, the second for brass choir. The slow beginning of "Stairway" proper somehow manages to echo "'Round Midnight," with the remarkably supple tuba playing of Michel Marre taking a wonderful solo that could be mistaken (as indeed I did) for a trombone. The rocking dénouement so beloved by adolescent boys everywhere is crowned by the cerise on Tortiller's gâteau: a full brass-and-reeds transcription of Jimmy Page's iconic Telecaster solo. (A wink, perhaps, to George Russell's celebrated big band transcription of Miles Davis's solo on "So What"?)

Other tracks include fine readings of "Black Dog," "Dazed and Confused" and "Kashmir," as well as a handful of brief and lyrical originals based on Zep themes. Perhaps the most successful marriage of material and arrangement is the relatively obscure "Four Sticks" (if indeed any track on Zo-So can be described as "obscure"), Page's rock and roll guitar riff sublimely transformed into a very jazzy bass-and-vibes figure, without any real change in the rhythm.

In the end, I'm not sure I can shake the novelty angle surrounding the record: sometimes it sounds like these remarkably gifted musicians are bringing a lot to bear on music that, as compositions, cannot quite bear the strain. And yet, for me and, I suspect, a whole swath of jazz fans of my (rapidly advancing) age, these compositions are so much a part of the musical air we breathe that no justification of their treatment in a project like this is required.

Indeed, the intersection of big-band enthusiasts and present and former Led Zeppelin fans is probably respectable in size: add the additional constraint that they have to be aware of developments on the current jazz scene in France, however, and the field narrows considerably. Let us hope that those enthusiasts find their way to this music.