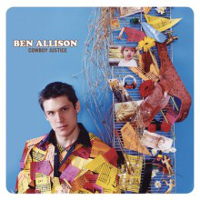 From the Jazz Composers Collective to Peace Pipe and Medicine Wheel, bassist/composer Ben Allison has been a force in creative jazz for over a decade. Joined by two Medicine Wheel veterans, drummer Jeff Ballard and trumpeter Ron Horton, Allison also invites adaptable newcomer Steve Cardenas—currently a member of the Paul Motian Band and the first guitarist to play in an Allison group—into the fold.

The titular theme seeps through the album, giving it a distinctly American flair. As a composer, Allison has long favored a sweet and sour approach, tempering his buoyant melodies with an undercurrent of melancholy, much like the finest pop songs. With Cowboy Justice, this populist sensibility is more than merely suggestive; Cardenas' electric guitar delivers occasional power chords and distorted leads, and the leader himself churns out funky acoustic bass lines. Without ever resorting to cliché, the group integrates the visceral quality of rock music in subtle and inventive ways within the lyrical melodies and churning riffs of a number of these tunes.

At first the song structures seem fairly straightforward, but they quickly reveal themselves to be full of rhythmic intricacies and harmonic complexity. Never vamping simply for the sake of grooving on a backbeat, Allison and Ballard employ rhythmic modulation and keen call and response as their foundation.

Altruistic to a fault, the leader takes only one extended solo, a masterfully lyrical excursion on "Hey Man." The ubiquitous Horton proves a stunningly original soloist with his euphonious tone and fluent lyricism. His soaring variations on "Tricky Dick" and "Talking Heads" are models of tunefulness. He manifests a romantic, mellifluous side on "Ruby's Roundabout" and offers a serene interpretation of John Barry's "Midnight Cowboy" theme. Conversely, his splintered fragments and split tone cries on "Emergency" and "Blabbermouth" reveal a dissonant, dark side.

Cardenas' lyrical fluency comes to the fore on "Tricky Dick," while his rockish power chords and searing fretwork dominate the aptly titled "Emergency." "Weazy" finds him knowingly mining Frisell territory with a jaunty, lighthearted run through a quirky Americana theme. Ballard's sensitive dynamics are a wonder to behold; from minute percussive interjections on the lyrically gorgeous "Midnight Cowboy" to a pulverizing trap set assault on the postmodern spasm of "Blabbermouth," he demonstrates nearly boundless technique.

Cowboy Justice is one of Allison's most intimate group recordings, a stripped down quartet session with a truly egalitarian world view of jazz improvisation. According to Allison, "It is American music. It is world music ... It's a reminder of why America is a great idea. It's a reflection of this country the way I see it and of its place in the world, not of how it's been recast."