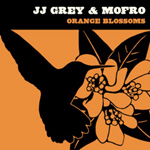 JJ Grey and Mofro's follow-up to their critically and popularly acclaimed 2007 Alligator debut, Country Ghetto, sounds a little less shocking but no less rocking. It feels as if that first release, in retrospect, was a shout designed by songwriter, producer, singer and multi-instrumentalist Grey to get your attention. Orange Blossoms stretches out into real conversation now that he's got it.

Grey and his ensemble, Mofro, offer one of contemporary music's most authentic blues sounds. Their songs, and the singing and playing that give them life, just sound and feel so very real. Several tunes groove with Mofro's update on the funky, shuffling backwoods rhythms of Creedence Clearwater Revival and other roots-rock progenitors, such as "The Devil You Know" and the exceptionally lively "On Fire," which breaks down into a smeared blues trombone solo before it cooks up nice and hot.

But Grey & Mofro dig much more than just some same old ground. "Higher You Climb" overflows a musical form that's just as much bayou funk as it is rock 'n' roll with bad intentions. A guitar solo that echoes renowned Elvis guitarist James Burton pumps more rock into the R&B rave-up "Ybor City." "WYLF" further accelerates the pace, bubbling over its rock steady quarter-note bass line with a guitar solo that whirls in the freewheeling style of Gov't Mule, the Allman Brothers and other jam-band rockers from the American south.

On several other tunes, Grey &; Mofro go deep. "Dew Drops" returns to what seems to be one of their favorite, familiar themes—the simple pleasure of enjoying the beauty in nature that surrounds us. "She Don't Know" and the song it melts into, "The Truth," sound like personal, private meditations that Grey might have written more for himself than anyone else.

The set-ending "I Believe" sounds like the coming of age song that Grey's been waiting his whole life to write, one that celebrates faithfulness and honors honorableness with the resounding emotional impact of genuine gospel and soul—and even fades out with a repeated chorus that brings to mind The Beatles' famous "Hey Jude" coda. It seems a good bet that "I Believe" closes their live performances, and that concluding a concert with this promise of faith, hope and love sounds pretty sweet.

Orange Blossoms; The Devil You Know; Everything Good is Bad; She Don't Know; The Truth; WYLF; On Fire; Move It On; Higher You Climb; Ybor City; I Believe (In Everything).