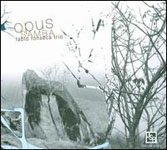 Arnaldo DeSouteiro produced Opus Samba to feature Fonseca's funky Hammond B-3 organ in his trio with Pedro Leao (bass) and Mac William (drums). Though you won't hear any jazz standards on its set list or many harmonically adventurous jazz solos in its jams, the very musical way that Fonseca and friends blend together jazz, Brazilian, Latin and soft funk rhythms makes Opus Samba a nearly perfect jazz trio set.

"Samba de Nanh" crisply yet softly opens this Opus with bright Brazilian colors in splashes of rhythm, and you can immediately hear how Fonseca seems to project a very different Hammond sound than, for example, Joey DeFrancesco, or others who sound more connected to the instrument's more familiar gutbucket soul-jazz presentations. The rhythm section leads Fonseca's organ in their dance through Stevie Wonder's "Too High," with William's percussive accents and beats making the soulful rhythm feel even more vibrant.

Their subsequent cover of Ray Santos' "Cochise" sounds more like Latin jazz, with Fonseca ripping into his organ, radiating sheets of sound like brass section blasts and shaping the rhythm, instead of bouncing along with it, through this sharp attack. This is not soft and sweet Brasilia—this is Brazilian jazz in the best musical sense of both terms. (Ed Lincoln scored a hit with "Cochise" in '66, which enjoyed resurgence in the European acid-jazz heydays of the '90s; Fonseca found and purchased Lincoln's Hammond-B3 in '94, and plays this tune on Lincoln's B-3.)

"Dormideira" turns back the rhythm section's tempo but not their tightness; this beautiful original melody, polished to a supple sheen by producer DeSouteiro, strongly suggests the sweet delights of albums recorded by Deodato and Jobim for Creed Taylor's CTI label. So does "Mr. Bertrami," Fonseca's tribute to the founder and leader of Brazilian jazz-fusion supergroup Azymuth, Jose Roberto Bertrami, where the drummer consistently changes up his counterpoint to the bassist's Brazilian metronome to keep the groove feeling new. Sounding both happy and sad, Fonseca's "Missing Dom" similarly honors the late percussionist Dom Um Romao.

"A Mulher de 15 Metros" features vocalist Ithamara Koorax, whose crisp yet round phrasing and balance between control and abandon come together to create a singing style that, like Fonseca's instrumentation, is truly both Brazilian and jazz.