By Glenn Astarita
February 1, 2009
Sign in to view read count 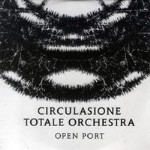 This largely high-impact orchestra launched in 1984 by Norwegian multi-reedman Frode Gjerstad is more of a collective, where young and veteran jazz-based improvisers pass through to abet the unit's continual evolution. It's an acoustic-electric format that might be analogous to a histogram amidst the abundance of pointy spikes and steady-state flows.

The orchestra looms as a multidimensional powerhouse, teeming with interesting contrasts and knotty sojourns. With jangling percussion, supple interludes and blistering crescendos, it elicits notions of a subterranean environ. This is partly due to Borre Molstad's understated tuba lines on the second movement of the lone piece, dedicated to Gjerstad's former band-mates in the group Detail, titled "Yellow Bass & Silver Cornet (In Memory of Johnny Mbizo Dyani And John Stevens)." Gjerstad then accelerates the variable cadences with his wily clarinet phrasings atop Anders Hana's blistering rock guitar lines. At times, the musicians perform as though they're possessed by spirits, with the intentions of rising to a state of divine fulfillment.

In alternating regions of sound and scope the artists execute a barrage of soul searching motifs, firmed up with free-form exchanges and weaving horns choruses. But they also mix it up with scrappy interplay, creating a mind-altering experience that is incredibly powerful and intense. Gjerstad and friends prove, beyond a doubt, that free improvisation coupled with synergistic interplay yields substance. It's a 360 degree panorama of rapidly-moving themes, underscored by gobs of imagery and the instrumentalists finely tuned improvisational faculties.