The Allman Brothers Band: One Way Out-Live At The Beacon Theater 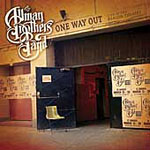 The Allman Brothers Band could have very easily been a casualty of the bad luck and bad decisions that have plagued many popular bands coming out of the early 1970s. Following the deaths of Duane Allman and Barry Oakley, the band continued to record with various personnel and configurations, never fulfilling the promise the band originally held. The recordings after Brothers and Sisters were largely disappointments until the band signed with Epic Records and produced a string of comeback records of note. But it wasn't until the band tossed founding member Richard Betts and added back Warren Haynes and slide guitarist Derek Trucks (along with new members Oteil Burbridge and Marc Quinones) that the band gelled into a working unit surpassing the original lineup.

And this is a different lineup with a different personality. Warren Haynes is not Dickey Betts and Derek Trucks is not Duane Allman. Nor need they be. This new live recording and the recent Instant Live Recordings show that this new band has created their own "In Memory of Elizabeth Reed" in "Instrumental Illness" and have replaced "Ramblin' Man" and "Blue Sky" with "Rockin' Horse" and "Desdemona." The Allman Brothers Band is carefully mining old material and very intelligently adding new material to shows that are the perfect balance between the free improvisation of the Jam Band Movement and the three-minute pop-sensibility of '70s AM radio. Like Little Feat, the Allman Brothers Band has completely reconstituted into units making new music as opposed to simply recapitulating the old. This is a band that has a great deal to say and they are just getting started.

For more information, I would direct the reader to several Doug Collette articles on the Allman Brothers Band at All About Jazz, including:

Visit Sanctuary Records and The Allman Brothers Band on the web.