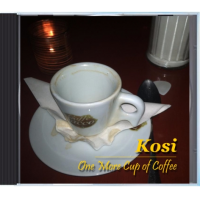 Kosi is Akosua Gyebi Sorensen, a New York born and raised vocalist, guitarist and songwriter who attended Brooklyn College where she began performing with the college's Small Jazz Ensemble. According to her website, One More Cup of Coffee is her third album but the first released under her own name. It was recorded in August 2013 and features Kosi plus "one take wonder" guitarist Aron Marchak. The absence of any other instrumentation gives the music a loose, open feel and puts the voice and guitar firmly in the spotlight. Both are more than able to stand up to such scrutiny, and their thoroughly convincing performances never make it feel as if other instruments are required. Marchak is excellent throughout, supplying sympathetic accompaniment which perfectly frames the vocals plus inventive fills and solos that keep the music fresh and interesting without stealing the limelight away from Kosi's voice.

Nine of the album's eleven tracks are credited to Kosi, including the title track (which bears no relation to the Bob Dylan song of the same name.) The other two are Mingus's "Goodbye Pork Pie Hat" and Vernon Duke's "Autumn in New York"; on the former her wordless vocals soar and harmonise with the guitar, while on the latter she invests the lyrics with great meaning and wrings every ounce of emotion from them. Such variety and versatility is typical of the entire album; it is full of delightful twists and surprises so that there is not a dull moment on it.

Kosi's own songs cover a broad range of subjects and emotions, from the disturbingly surreal imagery of "Little Miss Generous" ("She ran out of money so she gave up her soul / she plucked out her fingernails right from the cuticles / peeled them right off and tossed them in a bowl / and she gave it all away 'til she had nothing left to give...") right through to the unashamed romanticism of "Need Your Love." And her range of vocal styles and techniques is just as diverse as her songs. On "Marlene," she accompanies herself on acoustic guitar in a folkish performance that is reminiscent of many a singer-songwriter, but it is punctuated by an extraordinary central section of wild wordless vocals which at times verge on bestial.

The album's final surprise comes right at the end. The credits list ten tracks varying in length between two-and-a-half and five minutes, but once they are over, a further hidden track plays for eight-and-a-half minutes and brings the album to a fitting conclusion with the words, "These words from my mouth I offer to you / these tender melodies I offer to you..." Remember the name Kosi. She is on an upward arc and seems certain to rise rapidly. Yes, definitely one to watch!