De Beren Gieren: One Mirrors Many 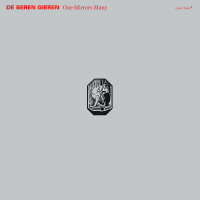 An impatient energy pervades the ten cuts. Ottervanger likes to mix it. While a melodist at heart, his preparations on the piano accentuate its percussive nature, heard particularly on "La Laisse Lointaine" and the second of three brief untitled pieces which appear to be improvised moods. Segers recalls Gerald Cleaver in his busy rattle, but also varies his palette with subtle electronics, while Van Pée deftly handles whatever comes his way. But it's hard to get a fix on them as they all cover so much ground so quickly. All the more so as many of the numbers place disparate elements alongside a more straight-ahead core.

That's the case in "Rebel Jazz To Rebel Against," in which they initially intersperse outside effects amid a Latin rhythm. A passage of thrumming bass, interlocking meters and insistent bass register piano vamp ensues, which strongly evokes the Craig Taborn Trio in their pomp. By contrast on "Schaduwleven," the improv and textural ideas are interwoven with the pretty tune. After a shimmering start of clanking percussion with restrained electronics, a pellucid piano melody emerges from the clatter. Then minor key lyricism, bass thwack and drum chatter advance as three separate strands, until they eventually cohere for the close.

Taborn also seems to be an inspiration on "(De Zachte Jacht Op De) Volkswolf," where the group tends towards the egalitarian trio model. In a ballad form, high arco moaning backs funereal piano, while the drums insert another vaguely Latin groove to add a touch of ambiguity. A crashing interlude of prepared piano and unsettling bass and drums intrudes into more songlike territory. While that intrigues, some of the juxtapositions elsewhere appear arbitrary such as the unison piano/bass exclamations on "La Laisse Lointaine." Perhaps one of those occasions when less might actually be more.