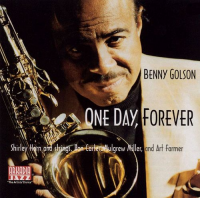 Benny Golson’s latest Arkadia release, One Day, Forever, arose from a taping of some of Golson’s previous band members from the Jazztet: Art Farmer and Curtis Fuller. At the end of a European tour, they were so rushed they that they didn’t record long enough to fill an entire CD. Arkadia owner Bob Karcy kept the tape in the can, and he and Golson kept that recording in mind, in the intervening five years, during which Farmer passed. After Golson wrote some new original music, it was agreed that the tapes from the “Whisper Not – 40 Years Of Benny Golson” European tour would finally be heard by the public.

The result is a CD in three mentalities, all of which are contained by Golson’s imagination: the famous sextet sound that produced numbers like “Killer Joe,” a string orchestra backing Shirley Horn as she sings the words to Golson’s new music, and a piano piece introducing Golson’s first classical composition. While not consistent in theme, One Day, Forever does reveal in startling contrast the creative curiosity of Benny Golson.

Joined by Geoff Keezer, Dwayne Burno and Joe Farnsworth, the Jazzteters recall the longevity of Golson’s contributions to the jazz vocabulary. Not confined just to the famous Jazztet works, the group entertained European audiences with some of Golson’s compositions for Art Blakey, like “Along Came Betty” and “Are You Real?”

Golson and Farmer never worked together again, although they remained close friends, so much so that Golson wrote “One Day, Forever” as a reminiscence of Farmer’s wife, who passed a few years before he did. As Horn sings it, sadly and tentatively with lots of space as always, “One Day, Forever” could allude to the abstract concept of loss of intimacy—which, of course, it does. By broadening the idea, Golson has expanded the sense of aloneness to apply to anyone who experiences loss. “Sad To Say,” again, is, well, sad, and the cellos reinforce the sense of guardedness and hurt. The melancholy of Golson’s new music has found a perfect outlet in the delicacy and woundedness of Shirley Horn’s style.

The surprise, even for those who expect it, is Lara Downes’ ten-minute premier of Golson’s piano étude, which would be expected in a recital hall rather than on a jazz CD. Certainly, one could say that One Day, Forever contains something for everyone.

The interesting aspect of the CD, though, is the darkening of Golson’s musical interests, with their melancholy themes and their veering away from the brightness, bustling energy and optimism that marked his work in the fifties.

One Day Forever, Blue Walk, Killer Joe, Are You Real?, Sad To Say, Out Of The Past, Blues Alley, Along Came Betty, On Gossamer Wings.