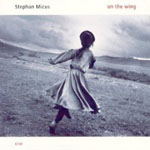 Stephan Micus' last album, Life (ECM, 2004), represented the multi-instrumentalist's most ambitious vocal album to date, layering as many as 14 voices at once. On the Wing represents a complete departure, his first entirely instrumental album in 17 years.

The painstaking piecing together of many layers of multiple instruments (with Micus performing every part, creating solo recordings in the truest sense of the word) might seem the antithesis of improvisation, but a 2004 interview reveals otherwise.

"I compose through many improvisations, Micus explains. "I improvise until I find some piece that I find interesting. I'll then work around developing this phrase more, until maybe a whole melody comes, and then at a certain point I'll decide whether this stays a solo piece or, if I have the feeling that it would be nice to have another instrument, I'll try out many other instruments that I have.

What's most remarkable about Micus' extemporaneous approach to composition is that, while it sometimes takes him years to develop a mere 50 minutes of music, it always feels in the moment, as if it were being performed in real time by a larger ensemble. Micus' interpretive sense of time is something that's a given liberty for the solo performer on a single instrument. To do it so organically when layering so many is a singular achievement.

Micus has spent years traveling around the globe, acquiring and learning new instruments. Each release invariably incorporates one or more, and On the Wing is no different. Two reed instruments—the Iraqi mudbesh and Burmese hné—are introduced, as well as the Indian stringed bass mandobahar and percussive Swiss hang, evolved from the Caribbean steel drum. What has always distinguished Micus is his ability to combine instruments from many cultures into music that transcends specific ethnicity. In life cultures may clash, but in Micus' world they coexist harmoniously.

Lacking the overt philosophical concept of Life, On the Wing still possesses a musical narrative. Two sattar (Chinese bowed instrument) interact with one mudbesh to create a spare, plaintive call on the title track. A sense of calm pervades "Gazelle, an Arabian nay (flute) creating a simple theme over Micus' classical guitar. "Blossoms in the Wind possesses a similar tranquil stasis, but is more texturally rich through its more expansive instrumentation. The album's centerpiece, "The Bride, is its most rhythmic, combining cymbals and gongs, guitars, mudbesh, hang and shakuhachi for a piece that has traces of Celtic melodies interlaced with music from Spain and places farther abroad. "The Gate is one of the album's highlights—a solo sitar piece that best exemplifies Micus' ability to take instruments away from their conventional musical traditions.

If music is inherently reflective of an artist's personality, then the solitary, meditative and deeply spiritual nature of On the Wing provides yet another compelling window into the evocative individuality of Stephan Micus.