Kenny Wheeler/John Taylor: On The Way To Two 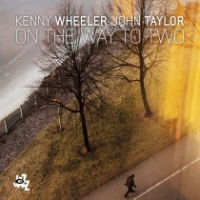 Trumpeter/flugelhornist Kenny Wheeler's death in September, 2014 led to the posthumous release on ECM of the beautiful and moving Songs For Quintet. However, since 2004, Wheeler recorded on CAM Jazz label, many times with the pianist who seems to be everywhere, John Taylor, starting with the duo-recording Where Do We Go From Here?.

2005 found Wheeler recording two albums with Taylor, a quartet record, What Now? and a second duo record 2005 Other People.

It turns out that there was a third recording in 2005, the understated, beautiful and moving duo recording with Taylor, On The Way To Two. Making this release especially poignant is the fact that during the album's production Taylor wrote these words to Wheeler in the liner notes:

To my friend Kenny,

I want to tell you what a joyful and exhilarating time I have had listening to this music that we made a decade ago. You sound so alive and brilliantly creative —inspiring me all the way. The new pieces are beautiful and your playing of them breathtaking. I should have asked how you did it —and also how you managed to cope with some of my rather oblique comping throughout the session! I remember we were not so convinced of our efforts at the time —which was often the case of course—but the passage of time has allowed me a more objective view.

It was a privilege and joy to play with you for most of my life and I wish you were here now to listen to this music again with me. All thanks and love, John.
Unfortunately, Taylor himself passed before the album's production was finished.

On the short side, with just under forty-five minutes of music, the core individual musical attributes of Wheeler and Taylor, as well as their remarkable communication is on display for all to hear. Of the ten tracks, five are Wheeler compositions, with three improvisatory "Sketches," one Taylor composition, and ending with the longest track, Billy Strayhorn's "A Flower Is A Lovesome Thing."

Recorded spaciously, the music is quite intense in the sense of there being absolutely nothing extra, requiring concentration; this is not background music. In juxtaposition and in contradiction to this intensity is the music's low heat that works delightfully with the composed/improvised lines that manage to be unpredictable while feeling inexorably logical.

The one Taylor composition, "Close To Mars," has the mournfulness of a Wheeler composition, but with a clearer construction, making this track feel a bit more grounded, while the three "Sketches," which include some inside-the-piano sounds, provide some aural palate cleansing and a bit of relaxation.

Everything comes together with the magnificent rendition of the Strayhorn tune. Wheeler's sound, pitch choices and the way he plays each note differently are completely apropos for this tune, as is Taylor's lush accompaniment and close reactions to Wheeler.

On The Way To Two is just about perfect and is a fine musical document to the memories of Kenny Wheeler and John Taylor.