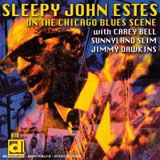 Sleepy John Estes was one of the numerous country blues men who benefited from the upsurge of interest in the music in the 1960s, some decades after they were first caught on record. He was recorded at the time of the short-lived Memphis Blues Festival in June of 1969, and the results are part of Mississippi Delta Blues Jam In Memphis, Volume II (Arhoolie, 1993) The music on this reissue of the album originally called Electric Sleep was caught some six months prior to that occasion ,and it finds Estes keeping the company of Chicago's finest. If anything, the effects of age on Estes are oddly more pronounced here than they are there, but are transcended by the music itself.

By the time this was recorded, of course, things had moved on apace from when Estes was first recorded for posterity, and the likes of Sunnyland Slim and Jimmy Dawkins, both of whom accompany him here, were steeped in the definitive urban blues of Chicago. The fact that there's such a high degree of empathy between leader and sidemen, however, suggests the change might not have been so great. The likes of "Drop Down Mama yield performances that are more than spirited, and whilst the listener is never in any doubt that Estes the vocalist is past his prime, the buoyancy of the music is emblematic of something both greater and deeper.

On the likes of "Divin' Duck Blues, Dawkins proves himself to be one of those guitarists for whom economy is a watchword for musical communication, and even when Estes peddles the old cliché about the sun shining in his back door someday, it sounds like the promise of something good as opposed to a falling back upon the tried and trusted.

The cracks in Estes' voice might put some off, but when they're notable on "Everybody Oughta Make A Change the recently deceased Carey Bell puts things right with his expressive harmonica.

"Need More Blues is the only track common to both this one and the referenced Arhoolie title, and its treatment here is arguably the better of the two, not least because Estes' vocal shortcomings lend it a certain charm derived from his defiance of the ravages of time. Sunnyland Slim's piano work in this instance is both rolling and resonant enough to suggest he might have been undervalued, or at least taken for granted by blues scholars.

Whilst there are better examples of the trumping of time passing when it comes to old country bluesmen caught on record late in life, this one is such a positive affirmation of life itself that raising the issue is churlish. The music has an uplifting quality that's certainly not thick on the ground in the present day.

I Ain't Gonna Sell It; Laura Had A Dream; Divin' Duck Blues; Walking Down Beale Street; Everybody Oughta Make A Change; Need More Blues; Drop Down Mama; Airplane Blues; How To Sing These Blues; Sweet Little Flower; May West; Easin' Back to Tennessee; Newport Blues.