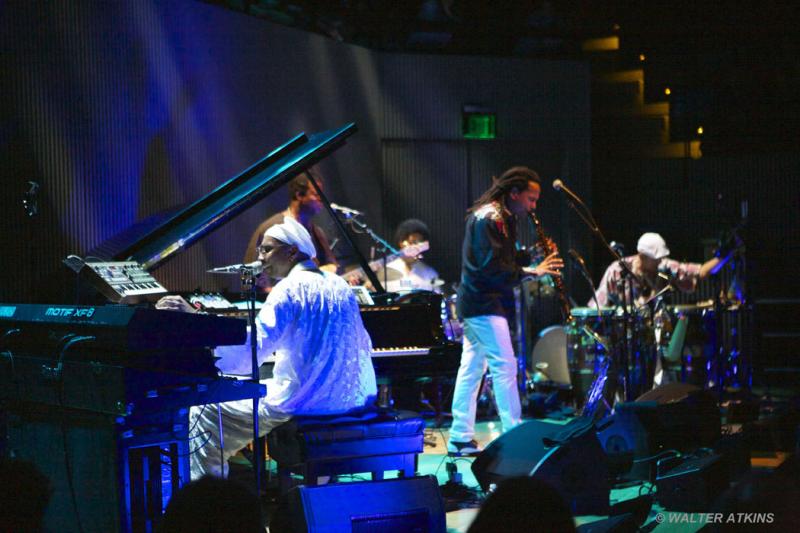 Acclaimed pianist Omar Sosa quietly took the unlit stage with only a single candle providing limited illumination. He silently started his show with a solemn keyboard solo. Respected SF Bay Area percussionist and educator John Santos then entered from the opposite side and joined in. The process continued until the last group member was onstage, contributing to the percussive mix. The full lineup consisted of: Sosa, flutist/saxophonist Leandro Saint-Hill, bassist Childo Tomas, drummer Ernesto Simpson and percussionist Santos.

During this extended introduction, each musician's spotlight gradually added more brightness to the set, and the music grew in rhythmic intensity. As the band played, their shadows danced on the wall behind them. Sosa let his songs grow and surge organically throughout the evening. The exciting play list included: "Intro Elegguá," "Mi Conga," "Iyawó," Mis Tres Notas," "A Love Lost," "Sad Meeting" and "Old Afro a Babá."

Each layer of powerful percussion made the overall sound denser. At times, the Cuban born artist played the piano with his elbow and knee. Whenever he did this, somehow it perfectly fit the moment in the music.

Sosa's music would rise and lift him from his piano bench as he played intently, while his body moved to the beat. Between songs, he talked about acknowledging the spirits of the ancestors that were with us. Behind him, the stage lighting was still casting moving shadows on the wall. During the concert, two ecstatic women started dancing in the aisle above the wide stage. They were eagerly joined by other joyful dancers throughout the spacious venue, who used the long walkways for convenient dance spaces. Seated supporters were nodding their heads all over Miner Auditorium.

The celebratory groove of "Iyawó" was strong. It took Sosa off his bench to insouciantly dance and play in place. Then, as the band continued performing, he glided across the stage. His energy was mirrored by more heads bopping in the audience. Encouraged by Saint-Hill chanting "Chachacha," people were thrilled to sing along whenever he invited them do so. All the songs cascaded into many moods, with enough flavor to satisfy everyone in the popular jazz center.

During "Mis Tres Notas," Santos took centerstage with a jingle cane to sing. The chemistry among the musicians was palpable. The cordial house staff were also enjoying the session. Mark, a floor manager commented, "It just flowed, but what do I know, I'm just a drummer," as he smiled. Debbie, a first time visitor to SFJAZZ, added, "I loved the show! For some reason, the show made me think of springtime, with feelings of blossoming, sunshine and showers."

At the end, the night's moving performance was rewarded with a sustained standing ovation, with very few seated. With Sosa in the center, the group members came together and bowed their heads for several moments in silent appreciation and acknowledgment. They all left the stage, with Sosa triumphantly raising his arm to give a peace sign.

The set's last song, "Old Afro a Babá," produced a thunderous standing ovation that demanded an encore and Sosa complied. He returned to the stage, with Santos and Simpson, for "Muevete en D." It was a funky triangle of percussive ebb and flow.

Sosa created a musical environment that progressively shifted from darkness to light, and elevated the listener to another place. His well- crafted AfroCuban polyrhythms provided the sonic propulsion that elevated the music to another realm. On that night, the ancestors were pleased.