Son Volt: Okemah And The Melody Of Riot - Deluxe Edition

By Doug Collette
November 3, 2018
Sign in to view read count 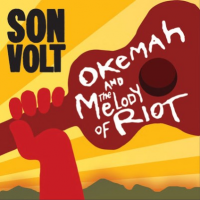 Jay Farrar has hardly shown himself to be a self-promoter during the course of his career. Dating back to the alternative country band Uncle Tupelo through his ongoing solo efforts and intermittently leading the similarly-styled Son Volt, this taciturn man has preferred to make his statements almost solely through his music. An exception to his low profile mode was work on and publicizing of the 20th Anniversary Edition of the latter band's Trace (Rhino,2015).

But the release of similarly-expanded expanded version of Okemah and the Melody of Riot deserves just as much attention, and at least as much, if not more, than that afforded a comparably-conceived package of The Search (Transmit Sound, 2018), issued with noticeably much more ballyhoo for the 2018 Record Store Day. Yet, like that double CD package (released then on vinyl for the first time), the addition of studio outtakes and contemporaneous concert recordings accurately positions the 2005 album in the broader context of Farrar's work.

As it appears in the (increasingly obsolete?) two-disc configuration, the fourth Son Volt album is comprised of all the formal album tracks, plus nine bonus cuts in various forms and from a variety of sources, including special performances off the previously released Afterglow EP (Transmit Sound/Legacy, 2005). In so amassing this varied content in a single piece, the package effectively ties up almost all the loose end from previous entries in the Son Volt discography. More importantly, however, its issuing provides another signal to become (re)acquainted with this brilliant yet undeservedly unsung songwriter and musician.

Still, to be fair, this release may also inadvertently provide reason for Farrar's relative lack of widespread recognition. At least in this configuration---there have been others, like the even rootsier Bakersfield country style of Honky Tonk (Rounder, 2013)—Son Volt doesn't sound altogether original, but rather much like Neil Young with Crazy Horse, sans sprawling improv. Most tracks resemble "After Glow 61," tight and economical with solos such as they appear (most appropriately on this paean to "rock and roll rattling around my head...") short and to the point. While this approach on the one hand emphasizes how sturdy but unremarkable are Farrar's accompanists, it does also highlight their innate sense of discipline, a virtue that stands them in ever good stead when the group goes acoustic, as on "Medication."

Something of a bluegrass reel crossed with an Indian raga, this tune is a clear illustration of Farrar's unusual way with a melody, an idiosyncratic trait carrying over to his command of language for lyrics. Phrases often title his tunes as much (or more) for pure imagery than logic (see "Bandages & Scars"), but then there are the cryptic likes of ..."love like ipecac...," purposeful word choices that compel listening closely (and/or often) while reading what Jay Farrar's written.

Fortunately, that particular content is printed inside the digi-pak here (rather than the booklet within its predecessor), a frugal move that slightly begs the question of whether we will ever see the existing documentary on the making of Okemah And The Melody of Riot. Included in limited Dual-Disc format around the time of this album's original release, the film remains the only asset outstanding, with the otherwise previously-promo only material appearing here that consists mainly of live takes on album tracks interspersed with a pair of non-album studio cuts of "Exurbia" and "Anacostia."

"Endless War" hints somewhat offhandedly at Farrar's gift for terse topicality, an approach that came to the fore on Notes of Blue (Rounder, 2017), but perhaps just as importantly, this composition, like "Gramophone," reaffirms the collective self-restraint of the band, especially in the sparing use of vocal harmonies as well as electric acoustic dynamic shifts: distortion never quite overcomes the undercurrent of twang. And that's not to mention the astute sequencing of the official thirteen tracks.

Playing piano solo on "World Waits For You," Farrar's voice reaches a slightly higher register than his usual dolorous tone, begging further comparison to the aforementioned Canadian rock icon Neil Young, but one as apt in its own way as likening the "Reprise" of that very same tune to the grand orchestral passages of The Beatles' Abbey Road (Apple, 1969); the forlorn air in the melody and the author's voice helps Farrar and company transcend the derivative.

As has been the case since his days leading the influential alt-country pioneers as well as significant collaborations such as New Multitudes (Rounder 2012), the vivid homage to Woody Guthrie (who was born in Okemah, Oklahoma), the force of Jay Farrar's personality alternately haunts and provokes throughout this combined eighty-minutes approximate playing time.