Home » Jazz Articles » If You Can Only Have One Christmas Recording…

By C. Michael Bailey
November 3, 2018
Sign in to view read count
This Holiday article is early and necessary. I am writing this rare stand-alone review of a Seasonal offering because I have a couple of bah-humbug friends who disrespect Christmas Music. I am giving them, and all other such music Philistines, their warranted comeuppance by introducing the only proof I have ever found for the existence of the Divine as we approach the Christian Holiday Season. If you wanted to limit yourself to a single holiday recording, may it be this one.

This particular recording I am considering is 28-years old. It is the first Chanticleer recording I purchased, shortly before I happened to find myself in San Francisco at Christmas seeing them perform this music in their home church of St. Ignatius, a Jesuit Roman Catholic parish located at the corner of Parker Avenue and Fulton Street, adjacent to the campus of the University of San Francisco. Chanticleer is an all-male chorus founded in founded in 1978 by tenor Louis Botto, who sang with the group until 1989 and served as artistic director until his death in 1997.

Today, Chanticleer is one of the few full-time classical vocal ensembles practicing in the United States. The group consists of 12 voices: 1 Bass, 2 Baritones, 3 Tenors, 3 Altos, and 3 sopranos. They have earned a reputation for crystalline a cappella treatments of everything from Early Chant to Renaissance Liturgical Music to jazz and standards. Chanticleer are specialists in Renaissance Polyphony, having recorded several notable works of early music, including Byrd, Brummel, and Palestrina. The group has also concentrated on music of the Mexican Baroque, as well as American spirituals and world folk music. But perhaps the most popular of their many releases are their Christmas collections, which number six or seven (depending on how one counts, and what music the listener considers Christmas Music).

I have recounted the experience of seeing the group live before in a previous article. So, believe me, music of this...this...whatever it is, is worthy of a reprise if not many of them. This is as far from some contemporary pop tart singing "Baby, It's Cold Outside" as Milton's description of Satan laying six miles long on a lake of fire in Paradise Lost is from our mostly secular 21st Century sensibilities.

But in the proper mythic appreciation, what passes for the "Holidays" today is not what Christmas is all about at all. No, it is about Hope... hope and gratitude—that thankfulness we have to that which is bigger than us, whatever it is. It is something none of us is beyond. In the Hellenic translation of the Gospel of John, "In the beginning, there was the Word" is pregnant with meaning: In ἐν ἀρχῇ ἦν ὁ λόγος. "λόγος" means "Word," But it also means "Idea." This distinction makes this Old Story much more meaningful to me. Ergo, the message of the Fifth Chapter of Matthew is much more meaningful, and close, to me as part of a beautiful and instructive myth that we may ignore only at our own peril. We should all accurately identify and come to terms with our individual Christian Tradition. For some it is necessarily the center of all. For others, it is a necessary part of our personal history. This music of this tradition, then it is released in all its beauty and mystery works magic no matter who you are. Take a chance and immerse yourself. 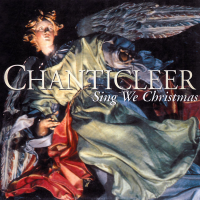 The American ideal of Christmas Celebration came from Germany, where the Christmas Tree ("O Tannenbaum") was born. Most of the our American holiday traditions come from the Germans. Der Weihnachtsmann (the Christmas Man) is a direct descendant of Saint Nicholas and can easily be seen from the derivation of the name "Santa Claus." Trust me...I come from a long line of these dower German Catholics on my mother's side, prominent in my upbringing. However, my confused character was also infused with the Protestant Irish glee of my father and was never far from my childish prayerful nature.

That said, I had grandparents who recited der Rosenkranz in the original, something I do yearly, in English, on the first Sunday of November at 3:00 PM Central Time at the cemetery hosting said grandparents, parents, brother, aunts, uncles, and cousins, St. Joseph's Cemetery in Paris, Arkansas. The Arkansas River Valley was settled in the mid-19th Century by a passel said dower Germans immigrating from Prussia and Alsace Lorraine. Some of these folks were named "Fuchs." They populated what is now Logan County. Fuchs was changed to the English translation "Fox" and here I am. This same bunch of Germans started the Benedictine Monastery in Subiaco, a few short miles from my mother's home. The Christian Tradition that I experienced comes from this lineage.

Chanticleer's sublime recording begins in what was 16th-Century Germany with an equally sublime performance of Michael Praetorius' (1571—1621) "Es ist ein Ros entsprungen" ("A rose has sprung up"). This is the most emotive melody composed before the birth of Johann Sebastian Bach (1685—1750). There exists an exuberant reverence in this performance that reflects, perhaps, how we might consider that which is bigger than all of us, properly. Forget the original German. You need it no more than you do the original Italian to understand Puccini's lament at the death of Mimi in La Boheme. It is so musically obvious that there is a celebration so big as to be celebrated with a quiet density.

Chanticleer reserves the most affecting pieces early in the recording. "O magnum mysterium" ('O Great Mystery") was composed by the 17th Century Spanish Composer Tomas Luis de Victoria (1548—1611). So majestic is this setting, that its warmth and closeness is enough to comfort the most recalcitrant of us. Following this are four settings of "In dulci jubilo," ("With Sweet Jubilation") often credited to the Michael Praetorius, but, in fact, is rightly credited to the German mystic and Dominican monk Henrich Suso (1295—1366) who did not live so far from my German ancestors in Western Germany at the time. Chanticleer presents the setting of this piece by four different interpreters: the first being 16th Century Anonymous, the second by said Praetorius, the third by the unrelated Hieronymus Praetorius (1560—1692) and the final by old man Bach. The melody is what moderns would recognize as the specious "Young Christian Med Rejoice." This is my favorite holiday song. Indeed.

And then the Germans are not heard from until near the end. "O Virgo virginum" ("O virgins of virgins") is a Flemish carol from the 16th Century composer Josequin Desprez (1440—1521). Ethereal and complete, it is a complete adoration of the Blessed Virgin. The Germans, never far behind, offered "O Jesulein süß, o Jesuline mild" in settings by Samuel Scheidt (1587—1654) and then by Old Man Bach again. We cannot rightly get away from Bach as the Divine placed him here to instruct us in our spiritual ignorance. After a couple of other Germans is the best of all music, that composed by "anonymous." I believe that the greatest gifts come from those we do not know. This Spanish "anonymous" composed "Verbum cara factun est: Y la Virgen le dezia; a uni nino Ilorando" this polyphonic carol from some dance melodies in the 1500s.

This collection is not all Medieval and Renaissance, not by far. Nineteenth and 20th Centuries England and The New World loom large. English composer Herbert Howells (1892—1983) penned "Here is a Little Door" distilling the Nativity to bare essence. William Billings (1746—1846) offers "A Virgin Unspotted" as an uncharacteristically happy English Carol (thought it does smack of a bit of Cotton Mather (1663—1728) and that devil Jonathan Edwards (1703—1758, "Sinners in the Hand of an Angry God")). It takes all kinds and that is the lesson for us to derive from this.

America's own iconoclast, Charles Ive (1874—1954) is represented with his beautiful and accessible "A Christmas Carol." This is the best that we "New Worlders" have to offer, as it should be. Included appropriately is a bright setting of Englishman Gustav Holst's magnificent "In the Bleak Midwinter." Just when one should believe that I have presented my sacred, ancient Germans, we are properly brought into the 20th Century. The Traditional American gospel/spiritual "Glory to the Newborn King" is the lengthiest piece on the disc, revealing the exuberance of the African-American Experience. This is not so far from "Es ist ein Ros entsprungen" at least by lightyear terms.

What do we close with? "Stille Nacht," of course. Is there nothing more Christmas than "Silent Night." This is the song that German and English combatants in World War I came together to sing on Christmas Eve during the Christmas Truce of 1914. The two sides came across "no man's land" during the First Battle of Ypres to exchange gifts, play games and sing Feanz Xaver Gruber's (1787—1863) famous hymn. All of this music is sung a cappella, as is necessary for such music. The power of belief and ritual can never be ignored, whether one is a "true believer" or not. It is our strange and magnetic heritage that makes these old songs resonate with such great power and majesty. If I ever had a musical line-in-the-sand, it is this. Happy Holidays.