By Dan McClenaghan
August 28, 2016
Sign in to view read count 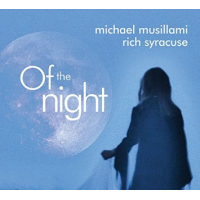 It would be hard to name an artist who has written more jazz standards than saxophonist Wayne Shorter, someone who has been penning memorable tunes since his days with Art Blakey's Jazz Messengers in the very early sixties. After his stint with Blakey, he contributed his singular song crafting acumen to Miles Davis' Second Great Quintet in the same decade, as well as recording numerous albums under his own name on Blue Note Records during that time. Now, the year 2016, seems to be shaping up as a Shorter tribute time, with pianist Denny Zeitlin releasing the solo piano outing, Early Wayne: Explorations of Classic Wayne Shorter Compositions and now, with the Michael Musillami/Rich Syracuse guitar/bass duo offering up Of The Night.

Whether with solo piano or guitar/bass duo, a pared-down approach to tunes that were written with a quintet (or more) in mind is revelatory. Musillami may have begun his career in a mainstream mode, but he allows himself a great deal of freedom here. He and Syracuse open with one of Shorter's most memorable tunes, "Footprints," that appeared originally on Miles Davis Miles Smiles (Columbia Records, 1966) and Shorter's own Adam's Apple (Blue Note Records, 1966). It is a spacious rendition, patient in its delivery—a Zen exploration of the permutations of the tune, a journey that wanders some back roads, alleys and roundabouts, with multiple re-visitations to the melody's main thoroughfare.

Duo playing at its best is an intimate conversation. Of The Night has the smooth flow of practiced musical conversationalists—supple bass lines undulating inside ringing guitar notes, spirited give and take, themes stated and variations on those themes given free reign.

"Juju," from Shorter's 1965 Blue Note Album of the same name, slides on a bed of mercurial chords and succinct single notes, riding the cushion of understated, almost subliminal bass lines—a bass approach that, for all it subtlety and grace, draws the ear, even as it enhances and bolsters the ideas of the guitar.

As it was with pianist Zeitlin's disc, Musillami and Syracuse concentrate on the genius of Shorter's 1960s output. His music then—such a departure from the standard mainstream that preceded it—sounded surreal then. This guitar/bass duo makes them more so, especially when they depart from the charts and ruminate and inject their own personalities into these classics.

And the sound is terrific—pristine clarity that allows every touch of every string—bass and guitar—resonate.