By Budd Kopman
September 30, 2016
Sign in to view read count 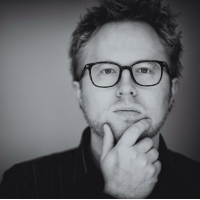 Pianist Matt Piet is most definitely a thinking man's player, roughly on a par with Ron Stabinsky (see Free For One), but with less notoriety (at least for now). Appearing as a member of the cooperative group Four Letter Words on Blow, he seemed to drive the music with a strong, clear musical personality.

Of Sound Mind is his recording debut as a leader, and is intended as a major statement of intent. The instrumentation is that of a piano trio and includes Albert Wildeman on bass and Julian Kirshner on drums; however, this music is anything but that of a traditional piano trio.

What we have is five tracks of free improvisation where each player is basically an equal, with Piet mostly leading the proceedings, but allowing the music then to go where it may, creating the overall impression is that of a very tight group with extremely sharp musical reflexes. While the music does not "swing," (although "Onward and Upward" teasingly feints so in its opening measures) many times a pulse of sorts emerges; there are no obvious harmonic progressions, and yet the music feels grounded and not atonal. Each track does end up with a musical identity that becomes apparent after repeated listens.

Piet's playing is full of energy, direction and intensity, which is matched by that of Wildeman and Kirshner. This is music that is meant to closely listened to and actively followed. While the flow of "free improvisation" cannot be predicted, which is part of its allure, each track's development feels completely natural and at times inevitable. The music breaths by how it changes in density, and following its ebb and flow is a major factor in staying in touch with a track's developmental arc, with each player affecting the density in his own way, singly and in various combinations. Time, as measured by how dense the music is at the moment, might slow down here or there, but the concentration and purposefulness never flags.

In the end, this is a highly rewarding listening experience and Of Sound Mind contains fascinating and engrossing music with much to say.

Piet and the trio are sure to be heard of more in the future.

Clang Association; Down & Out; The Dr. Will See You Now; Mood Swing; Onward & Upward.