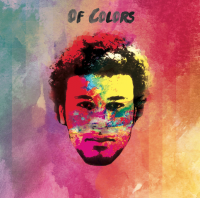 Curtis Stewart's biography may read like a playlist of his biggest influences—not least of all his father, jazz tuba pioneer Bob Stewart, and mother, Greek violinist and composer Elektra Kurtis—but the blazing violinist has made an indelible mark with his debut record as a jazz leader, Of Colors. From among said influences, Curtis pays homage to a selective pedigree, crafting a series of mostly vignette-sized portions into a dual program—split between the title suite and another, called "(UN)- folding"—that overgrows its borders even as one listens to it.

There is not a shred of gimmickry to be found on Of Colors, surely an understatement about an artist who sandwiches John Coltrane between J. S. Bach and Anton Webern without skipping a beat. This trifecta leads up to "Alone Together," a Stewart original in a wry gypsy mode that is equal parts Stéphane Grappelli and Mark Feldman. Here, too, is where allies Alex Hills (keyboards) and Alex Wyatt (percussion) turn themselves inside out to discover what lies within, behind, and under every molecular development. Before that, at the start of the album, Stewart lays down the Adagio of Bach's Violin Sonata No. 1 in G minor, which for all its hundreds of iterations on discs analog and digital has never sounded quite like this. As in the scattered sonata as a whole, reordered to withstand Stewart's creative bite, passages of stark familiarity take on surreal casts as that lithe bow plunges into its source material with abandon, as if in search of roots. But none of those roots is the same. The melodious slurry of the Presto betrays nothing of the Siciliana's ambient backdraft or the Fugue's botanical remix. What the latter effects do disclose is the wizardry of electronicist Tyler Gilmore, whose microscopic surgery slices Webern's ghost until it is undetectable. The Austrian modernist's Four Pieces, Op. 7 are like all of human evolution in miniature, swimming, crawling, walking, and flying along a supremely detailed timeline. If Bach is rendered in wood, then Webern is the charcoal it produces when burnt by Stewart's keen insight.

Only in such a universe can Coltrane's "Giant Steps" and Outkast's "Prototype" be equally sincere, allowing the musicians freedom to soften boundaries to the point of improvisational porosity. In both Stewart pans for solid gold, thus revealing impulses trapped inside millennia of sediment. Yet so much of the magnetism attracting all of this ore emanates from Stewart's own writing. Whether in the lucid funk of "Descent" or the spiritual-esque "Gone" (a reprise of which signs off the album), he shakes the cotton from its prison with gusts of innovation. Now and then, artful beatboxing and other subcutaneous stirrings lend obviousness to the biological persuasion of it all. The cumulative effects of "Tectonics," which at nearly eight minutes is the longest cut, embodies the breadth of Stewart-ness in one spell. So does "Of Color(s) and (UN)-folding," a brilliant piece for string quartet bursting with ideas. It can be no coincidence that the parenthetical letters should spell "sun," for his is a spectrum brightly arrayed.

This album does for the violin what Heavy Blue, does for the voice. Like Moran, he is an artist who cannot be placed on a shelf, because he'll only break it and remain floating where you put him, but of his willful volition.

Title: Of Colors | Year Released: 2016 | Record Label: Outside In Music