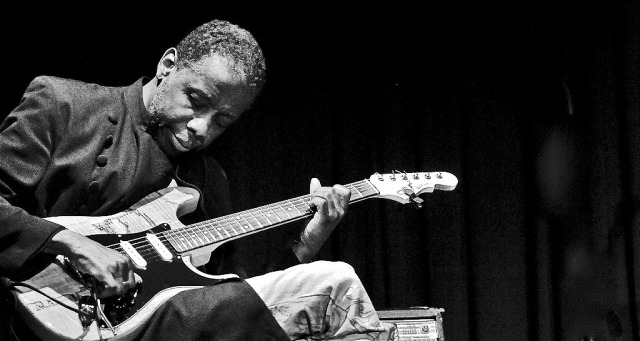 By CHARLES BLASS
February 22, 2013
Sign in to view read count
"When the music's happening, life is happening.... Why must we only join hands after the storm?... How true are you? Nothing else even matters." —Jef Lee Johnson

Jef Lee Johnson, prolific, virtuosic, humble, was in some ways not made for this world. "I'm over the world," he sang. He was certainly made for music though.

Time to tell the truth about Jef Lee Johnson. For too many, it's better late than never. His brilliance was evident enough, however in his lifetime many people, including fellow artists and the entertainment industry, weren't able to face his truth.

News of Johnson's passing (from pneumonia and diabetes complications on January 28, 2013) spread like wildfire across the interwebs. Fans and fellow musicians, associates and bystanders, expressed heartfelt shock and dismay.

This will hardly be comprehensive as a survey or "proper" obit. The magnitude of Jef's ability and output deserves at least a Wikipedia page and ultimately a book and film.

Below (get comfortable, it'll be a while) I've gathered plenty of high energy reflections from the worldwide Jef Lee Johnson community (concentrated in Philadelphia, New York and Europe). The voices of a multitude of artist associates, friends and fans attest to Jef's greatness and to the chasm between his tremendous significance and the low level of acknowledgement during his life. Dogpile-style, this is a town meeting on Jef Lee Johnson, maybe reminiscent of a WKCR marathon memorial.

Also contained below are several related links including information on a scholarship fund in Jef Lee Johnson's name.

The odyssey of Jef Lee Johnson could be considered a tragedy, in that he died without "widespread" recognition; yet he touched everyone in his path with pure beauty, wisdom and humor, which is a miracle. Jef's prolific output and furious globetrotting (not to mention continual orbit between New York and Philly) meant he was always a moving target, and real quiet about his accomplishments. I've assembled some of the events and highlights in Jef's world that intersected the orbit of my attention and most grateful experience. Perhaps laying the groundwork for a more comprehensive examination, the overall result will be more impressionistic. Someday his full discography, sessionography, videography might be approached. Here is a work in progress, collection of links and resources relating to Jef Lee Johnson at Pearltrees.com

Jef's been at the pulsing heart of my musical-spiritual universe since I first basked in his tones, thanks to Mitch Goldman's organizing the earth- and sky-shattering Mondays with Ronald Shannon Jackson's Decoding Society at the old Knitting Factory in 1989-90. I barely missed a single set.

Since that moment, barely a week went by without my telling someone about "my favorite living guitarist." Barely a day has gone by that I don't think about Jef, or a week when I don't listen to his music and tell someone how great he is; as he left the planet, that just turned into a moment. Almost every episode of "Audio Gumbo" or "Sun Radio" for over twenty years featured some of Jef's music. He's still among the most sublime players ever, alive or post-alive. Of course, they're all still breathing their special brand of fire and light.

For a time in the early-mid 1990s Jef and I worked together closely, and over the years I've supported his efforts especially promoting and sometimes booking, producing, recording.

My journey with Jef, as ally and supporter, sometime "manager" or unwitting adversary, all-time believer, include so many bright moments. Looking back, the amount of driving he did between Philly and New York was extreme. And considering the amount of bread involved in most cases, it was absurd. He was so giving, for what seemed to be small gigs, which made all the difference to whomever was involved. He touched many of us with his presence, even though not so many were in attendance.

Beyond supreme musicianship (on nearly all instruments), Jef's artistry was complete: He excelled in poetry, filmmaking and the technical aspects of producing contemporary audiovisual media. His lyrics demonstrate word mastery that must be discovered to be believed.

Jef's instruments and machines included: vocals, guitar, bass, drums, chromatic harmonica, saxophone, sequencing, recording, video production... Jef's use of the recording studio, sound effects, drum programming, rhythm and vocal arranging abilities are all uncanny. Live, one of his preferred setups was two Fender amplifiers angled to envelop the room with his stereo beam. He always impressed me with the gorgeous and perfectly original sounds he created with his gear.

Jef's own music, performed mainly in trio format, is exquisite, blissful. In Philadelphia, New York, France and a few other places, for years audiences were treated to Jef's incendiary appearances. With Rob Reddy's Honor System and numerous other projects, Jef was featured prominently, along with bassist Dom Richards and drummer Pheeroan akLaff among others. Fans of Jef were thrilled to catch him any time with anyone, and Reddy's groups and adventurous compositions provided important channels for Jef.

Jef also appears on a handful of seminal hip-hop/R&B albums with some premier recording artists who generally under-utilized (perhaps wasted) his talents. One bar looped, down in the mix? Why get Jef? A couple of exceptions in which Jef is permitted to do his thing include Common's "Jimi Was A Rockstar" featuring Erykah Badu, and The Roots' "Water." It's telling that upon Jef's passing Erykah Badu tweeted "Rest in Beats," as he is barely heard on the many sessions he did for her albums.

Onstage, for example with D'Angelo or Esperanza Spalding, it seemed often the same story, like having a rare sportscar in the driveway and hardly driving it beyond the courtyard. Those superstars deserve recognition for hiring Jef, but it was a mixed blessing. Few bandleaders were confident enough to let Jef shine under their auspices. He was mostly kept in the background blend save for a few precious slivers here and there.

George Duke is one notable exception. His ego didn't prevent him from giving Jef room to stretch and blow, and many documents of their fruitful collaborations are available.

Whatever the reason Jef had in recent years for taking on the cryptic moniker, there seems to have been a strong resonance with the symbolism of "Rainbow Crow." At times Jef could be considered a "dark" character but his sounds are so full of light.

Yes, there was a Guitar God who walked among us, now departed from this plane, on to the next gig. Reckoning, grappling with Jef's death. Death becoming Life. One of his last albums is called Longing Belonging Ongoing.

Jef left behind generous heaping scoops of soul, infused with so much wisdom and love, overdubbed into eternal horizon. Like Etoy's conception of eternity, Jef lives in perpetuity online. YouTube, MySpace, MyFunk and other areas remain for all to seek and behold. May you be blessed to watch and listen to Jef Lee Johnson's soul shining.

He wrote a song called "Lovevolution," and I've often wondered if in part it was a personal message (I've used the name Lovolution since around the same time I met Jef). In any case it remains a testament to Jef's magnanimous vision and diplomatic mission.

I was fortunate to see Jef this past November here in Zurich, when he passed through with Esperanza Spalding. He seemed tired but not particularly ill—I guess he was absorbing his illness within deep exhaustion, maybe carrying it in stride. I gifted him with some sounds from my radio programs including his trio performance at WKCR, and a mix containing Velvert Turner, Dungen, Burnt Sugar, Cal Tjader and Ed Blackwell. He was polite, gentle and wry as ever.

Circa 1990 I acquired a guitar pick that had belonged to Hendrix, and gave it to Jef. It was a light one, and he used it only once, to record acoustic guitar on a tune called "Pray for Rain." The only thing to ease the pain: We'll be forever listening to the Rainbow.

"You can fix it, make it like brand new." I'm a supercool attendant in the carpark of life" "I once was free, now I'm changed..." "We all wanna be free from something..." "You're as free as you wanna be." "Never fret, never fear, always true, always here."

"I have to put these records out myself. The music is to be heard, not just me sitting around and improving upon what's been done. It's like having paintings hanging in the house. people have to see them—in my case, hear them"

JLJ is traveling... in out all through my door/window, all around... circle beyond circle. —Morita Wuji Hiroxi

Jef was one of the most unique guitarists I've worked with. His sound, choice of notes, style—all uniquely Jef. He will be dearly missed.— George Duke

Everyone listen to as much of his music as you can get ahold of. Besides being an incredible player Jef was an astounding lyricist. Still not ready to accept "was," though! —Chico Huff

We are forever touched and inspired by your sonic magic. Your beautiful being will always be treasured. —Venissa Santi

Jef was indeed a master, a mentor, and blessing to know who has left an everlasting imprint. There are many sides of him the world has yet to know and hear. Although he had played for everyone, he never ever cared about anything but the music. His bright smile and honest perspective led us to many conversations about how to navigate through the hype of different popular music opportunities, while still maintaining integrity and musicianship. At the end of the day, for Jef it was all about honesty and authenticity. —Crystal Torres

It is truly a cloudy day as guitarist Jef Lee Johnson has passed.— Bruce Mack

Having an extremely difficult time processing the steady departures of God's Best Work as part of 'God's Plan.' I don't know if I can believe in anything arbitrarily that cuts angels down in their prime while leaving evil and mediocrity to fester unchecked. Always remember, do whatever you do at FULL SPEED because we don't all make the finish line. ...BIG shoes to fill... —Darrell McNeill

What a great musician and very humble guy. It sucks that most of us are "self employed" so we don't have health care. And people wonder why musicians pass on at an early age. Me, him, Trevor [Clark], and Nate Adderley got the Aretha gig from the NY audition at SIR in 88. I didn't know how great he was till I left the rehearsal room on a break, and he stayed-playing-and blew me away. —Atticus Finch

Ornette Coleman and Humanity: Parts 1 and 2

A Question of Time

Jazz Out There: Out of Print and Unavailable