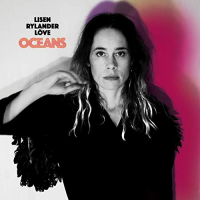 While up-and-coming Swede Lisen Rylander Löve is a talented tenor saxophonist, demonstrated nicely in the quartet Here's to Us on the undersung gem, Animals, Wild and Tame (Hoob Records, 2018), she is hardly content to limit herself to one instrument—or even one genre, for that matter. In Here's to Us she teams up with trumpeter Susana Santos Silva, bassist Josef Kallerdahl and bass clarinetist Nils Berg to make enchanting avant-chamber jazz. On Oceans, an ambitious solo project, she reveals her skill on a host of instruments, generally staying within an experimental pop idiom to sketch a world in transition, one in which hope and disorientation mingle on equal terms.

Rylander Löve references post-rock trailblazers Talk Talk as a major influence, and one can certainly hear how the band's later atmospheric albums like Spirit of Eden (EMI, 1988) and Laughing Stock (Polydor, 1991) are precursors to this music. Expansive tracks like "From Above" and "Nothingness" combine liberal use of synthesizers with searching tenor sax parts and amorphous vocals to generate soundscapes that are both capacious and slightly bewildering. Other tracks have a harder edge; the album's opener, "Shine," and "Neon Sun" utilize industrial-sounding percussion to undergird Rylander Löve's heavily distorted singing. On others, like "Border" and "Follow," processed loops and insistent drum tracks lend a compelling electronica-vibe to the music; antecedents here might be creative pop experimentalists like Grimes or Crystal Castles.

Despite the various possible parallels and influences on hand, Rylander Löve is without question following her own muse here. Her rich, earthy tone on the tenor sax, a key feature of many of the tracks, puts her distinctive stamp on the music. And her willingness to seek moments of space, as on the captivating "Awake"—a track with spartan musical accompaniment supporting her plaintive vocals—allows her to cultivate an openness and warmth that might otherwise be lost amidst the album's darker aspects. In her ability to create a convincing, thoughtfully-crafted sound world, Rylander Löve provides yet another reason to keep her on the radar.