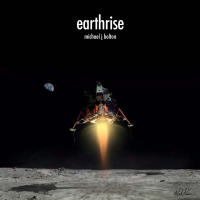 Not the first record to salute the fiftieth anniversary of the first man on the moon, and probably not the last, Earthrise is composer, producer and bassist Michael J Bolton's own lunar landing. Rob Cope's Gods Of Apollo (Ubuntu Music, 2019) is just one recent example on the same theme, but this is hardly a criticism since there doesn't seem to be much else in space exploration within the last half century that eclipsed (pun intended) this monumental event and its half century celebrations.

Ignoring the obvious comparison with Pink Floyd's Dark Side Of The Moon (Harvest, 1973), a more accurate similitude would be the prog rock opus by Jack Lancaster and Robin Lumley Marscape (RSO, 1976) which included among its starry participants Phil Collins, John Goodsall, Morris Pert and Percy Jones, rendering it a de facto precursor to Brand X.

The overarching impression imparted by Earthrise, (as with Marscape), is of an assiduously composed and arranged suite of music. The chunky 4/4 of "Trans Lunar Injection" (originally entitled "The Journey") is synth-rich and embellished with a stentorian bass groove. There's also the bonus of a shimmering soprano sax solo from ex-Yellowjackets Marc Russo. On the title track, guitar virtuoso Mike Walker takes the jazzy Goodsall approach as opposed to the more soulfully bluesy lines of the Floyd's Dave Gilmour. With his soaring lines, trumpeter Neil Yates adds a touch of Ian Carr's Nucleus finesse here, and likewise his coruscating playing impresses on the exhilarating "The Eagle." Tim Garland contributes some typically stunning soprano sax on the closer, appropriately titled "The Return." With Earthrise Bolton has produced an album that betrays a mixture of influences ranging from progressive rock through to funk and jazz fusion with occasional forays into more ethereal soundscapes, such as heard on the opener "The Launch." There's plenty of meat here to digest in this 50 minute space-inspired album and some excellent playing to boot.