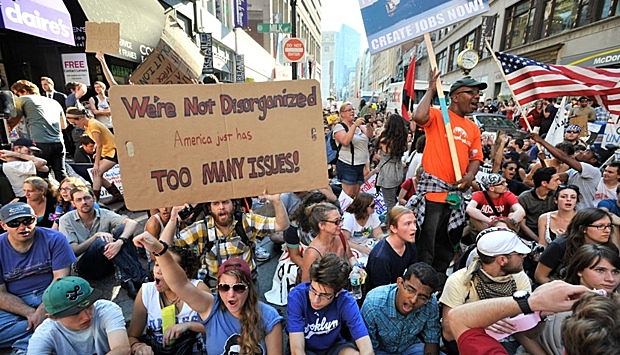 view slideshow
By RAS MOSHE
December 9, 2011
Sign in to view read count
Things have got to change! That is the cry being heard in the five boroughs of New York City, across the United States and, increasingly, in European cities too.

All sorts of people from all sorts of social classes are at the protests—because the realization has dawned that eventually everyone will be impacted by the self-serving machinations of the Wall Street greed merchants and their allies in the world's other financial centers.

It's great that jazz is becoming more of a component of the demonstrations. For too long, the music has been marginalized, even shunned, by political/social movements. One reason is that back during the cold war of the 1950s and 1960s, some painters, writers and musicians, knowingly or naively, allowed themselves to be funded directly or indirectly by the CIA. During the same period, the State Department bankrolled what were essentially propaganda tours by U.S. jazz bands in Africa, Asia and behind the Iron Curtain.

The money was good, but it was dirty money—and for activists with long memories, jazz remains tainted by those associations with the power structure.

Of course, AAJ readers know that this attitude comes from not understanding what jazz is really about, from failing to recognize its radical roots and its umbilical connection to the people. But, sadly, an awful lot of otherwise well informed political activists are mystified about real creative music, while they usually have all the time in the world for nakedly consumerist pop product.

The good news is that, with its support of 2011's international protest movement, jazz is becoming a part of what's happening again. I've been out to Occupy Wall Street many times and the reception from my fellow comrades/protestors has been solid.

Sometimes I play danceable jazz (great for long marches), sometimes I take it out a la saxophonists Albert Ayler or Pharoah Sanders. The demonstrators love it! They see and hear the connection; it's part of the feeling of the people in the streets demanding change.

My musical comrade, trombonist Steve Swell, puts it like this: "I view peaceful support of political actions such as the one Ras and I participated in on October 5th in support of the Occupy Wall Streeters, not as an obligation or duty, but as a natural outgrowth of who we are. This type of event gives us the opportunity to express what we are feeling as artists and as people. For me, it is the same as performing, practicing or teaching; it is a part of who I am. It is another way of being part of the community. Participating in these demonstrations as musicians also brings some extra energy to the proceedings. And it is enormous fun."

ADVERTISEMENT
Fun indeed! But not trivial fun. Rather, the kind of fun that sees us as being part of the movement for change.

As my good friend, vocalist extraordinaire Jean Carla Rodea, says: "The most revealing part of the march I attended was the realization that the attendees were 'folks just like us.' By this I mean ordinary middle class families struggling to make it. When my husband and I arrived, we could hear a large music contingent within the crowd. Almost instinctively, we located the musicians and then marched together. It was empowering."

Empowering! That's what jazz is supposed to be. In demonstrations and in general. Just listen to John Coltrane's saxophone. The empowerment of the spirit is so clear.

And I'm glad we're bringing that to the people out in the streets.

Sometimes it takes going to the street to demonstrate the importance of jazz's empowering spirit. The struggle to survive under greed will bring it out. And when the people see jazz artists sharing their concerns, it will bring more attention to what jazz is trying to achieve. In turn, some of those people will come and support us in our endeavors.

I feel that jazz in 2011 is playing a major role in social change. And we're not the elitists that we've been accused of being. The "free jazz" movement especially has to establish itself as having origins in folk music as well as the other known sources of its development. Those of us who play that way are the people and we have the same lives and concerns as everybody else. Many of us have day jobs, so even on a technical basis we are just the same as other toiling workers. There is nothing exotic or otherworldly about being a jazz musician.

Things have got to change! Onward!