By FLORENCE WETZEL
December 30, 2010
Sign in to view read count 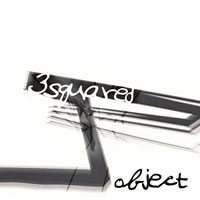 If you say "Colorado," the first things that come to mind are probably mountains, cowboys, and the Balloon Boy. But don't forget jazz: Denver's central location has always made Colorado an ideal stop for touring bands, and back in the day the Five Points section in Denver was host to greats such as Duke Ellington, Billie Holiday, and Charlie Parker. And of course, Jack Kerouac, Allen Ginsberg, and local legend Neal Cassady all lived here and dug the music, and some of their Denver musical adventures were made famous by Kerouac in his 1957 classic On the Road.

Flash forward several decades, and Denver still hosts a flourishing jazz scene, including an excellent radio station (KUVO 89.3), hopping clubs, thriving academic programs, and a host of local bands. Three Squared is a quartet based in Denver, and Object is making a splash in local waters, including being named one of Colorado's Top Ten Homegrown albums by Coloradan.com.

The six songs on Object were all composed by the band members. Elements of traditional jazz abound, including lyrical, well-crafted melodies, but then the band cheerfully throws out the standard architecture and creates its own unique structures. The opening "Chief Wiggum" starts with a lovely melody line, sweet and wistful, taken at a slow and steady pace. Matt King's sax is searching and yearning, his lines clean and pure. Once the band starts to explore the melody's corners, everything is up for grabs: dynamics and tempos shift freely, and Jim Disner's guitar work, which ranges from delicate filigree to outright reverb, takes the song into unexpected byways. "Chief Wiggum" is a musical treat, full of emotion and bursting with interesting ideas.

Another delight is "By Polar," which feels like a theme song for a 1960s British detective show. Percussionist Antwon A. Owens particularly shines with both straight-ahead and off-kilter backup. There's something joyfully askew about this tune, which also features juicy solos by Disner and King, and steady, imaginative bass work by Nathan Walter. Also noteworthy is "Preface," a graceful, elegant tune with tender guitar work and tiny bells of percussion. The music grows larger as the band starts to cook, the guitar gaining depth and reaching out into space, and the sax exploring a colorful range of sensations and moods.

There's much to enjoy and many things to chew on in these songs. Part of what makes Three Squared distinctive is its tonal experiments and use of advanced scales from non-Western cultures; this aural openness combined with the music's deeply emotive quality results in a rich smorgasbord of sound. It's great to see this band getting so much respect in their home state of Colorado, and it won't be at all surprising if its sounds begin to reach toward the coasts.