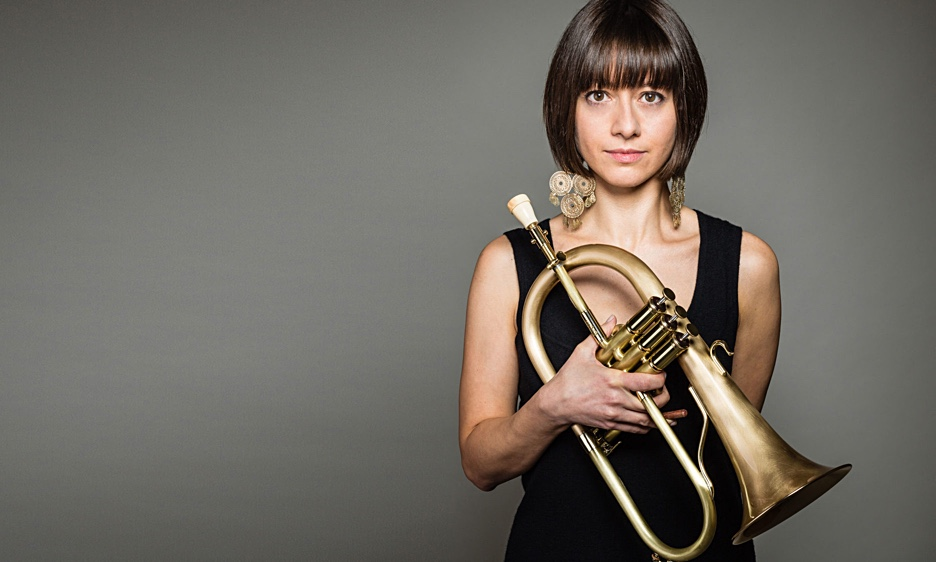 It was a pretty decent crowd for a Monday night. An older crowd, drawn to big-band jazz. Few, it seemed, were Belfast jazz gig regulars, at least, not the usual suspects who pitch up to watch the likes of Sons of Kemet, Instant Composers Pool or Get The Blessing. But if any in the audience expected the National Youth Orchestras of Scotland Jazz Orchestra to trot out Duke Ellington or Count Basie chestnuts then they were mistaken, for there was nary a standard in its vibrant, contemporary set.

It was a concert of two halves. In the first half, the twenty-piece NYOS Jazz Orchestra paid homage to contemporary Scottish/English jazz greats. In the second half, British/Bahraini guest artist Yazz Ahmed's Bahraini-influenced jazz, backed by the big-band, cast an altogether different spell. This five-date tour, also taking in the Sligo Jazz Festival, is part of NYOS' on-going fortieth-anniversary celebrations. Jazz has been part of the orchestra's curriculum since 1992, while the NYOS Jazz Orchestra was formed in 1996 -providing a training ground for some of Scotland's finest young jazz musicians.

Since 2006 the NYOS Jazz Orchestra has been jointly led by Andrew Bain and Malcolm Edmonstone, and it was the former who directed the first half. Bain paid vocal tribute to two, recently deceased giants of the Scottish jazz scene, Rick Taylor and Duncan Lamont. His glowing praise for these two influential figures was followed by musical tribute.

First up was Lamont's "Animals Parade," from the suite Carnival of the Animals, a short, upbeat ensemble number. In continuation, the swinging "Monkeys" featured impressive solos from tenor saxophonist Tallulah Molleson and acoustic bassist Ewan Hastie. The romping, Peter Gunn-esque "Elephants" was built around the individual and collective talents of trombonists Angus Grierson, Symone Hutchison, Jossy Nwokoye and Jamie Philip.

Nikki Iles was an inspirational figure in the early days of the NYOS Jazz Orchestra and the big band paid its dues to the Dunstable-born composer/pianist with a fine interpretation of her graceful "Westerly." Its rendition followed the arrangement of Stan Sulzmann, with elegant guitar work from Jacques Carroll.

The first set concluded in style with Rick Taylor's "My Island Heart"; starting out as a brooding tone-poem, rumbling bass, washing cymbals and gently keening alto saxophone conjured an atmosphere evocative of Joe Zawinul's "In a Silent Way." A sudden change in tempo lifted the music into the realms of a jig, with dancing trumpet lines central. Exhilarating solos from soprano saxophonist Ewan Gudgeon and keyboard player Moss Taylor crowd this epic adventure, before the ensemble voice gradually dissipated.

After a short interval, guest musician Yazz Ahmed steered the NYOS Jazz Orchestra towards the Persian Gulf with her Bahraini-inflected idiom. Melody, rhythm, percussion and solos—meted out evenly across the big-band—took on a distinctly Arabic flavor. The set began with two pieces from the alluring suite Alhaan al Siduri, inspired by the women drumming groups, pearl divers and rising sun of her country of birth. Over pulsating rhythmic mantras, with electric bassist Mark Sanford stepping up, a chain of bluesy solos unfolded, the leader's own improvisation colored by electronic manipulation.

"A Shoal of Souls"—a limited-edition single released in June—was Ahmed's impassioned response to the deaths of migrants crossing the Mediterranean in search of a better life. Part cry of protest, part keening lament, the heady, trance-like atmosphere of this dramatic number was unrelenting. The abrupt ending was not so much a resolution as a dramatic crashing against the rocks.

The title track of Ahmed's second album, La Saboteuse (Naim Records, 2017) was a smoldering affair, the dreamy, Arabic blues layers of the ensemble framing a hypnotic flugelhorn solo from the leader. Ahmed's bag, however, lay less in virtuoso display as in constructing emotionally striking soundscapes, and to this end the vibrant colors of the NYOS Jazz Orchestra's broad palette lent themselves well to her musical vision.

The closing number offered a foretaste of Ahmed's forthcoming album, Polyhymnia (Ropeadope Records, 2019), a suite written for London's Women of the World Festival, an annual event that celebrates the artistic and scientific achievements of girls and women. Ahmed explained that "Ruby Bridges" was inspired by the famous civil rights activist who, in 1960, became the first African American child to desegregate an all-white school in Louisiana.

Years after the historic event Bridges related how she had thought that the animated racist protests against her were just the noise of a Mardi Gras parade. Ahmed's musical translation, which juxtaposed innocence and anger, began with a celebratory, second-line rhythm. The joy soon gave way to tenser rhythmic patterns, and emotive soloing, climaxing in an explosive drum solo from Chun-Wei Kang. It made for a powerful finale to a consistently compelling set.

Aged from mid-teens to their early twenties, these musicians of the NYOS Jazz Orchestra played with a mixture of brio and discipline that would be the envy of older, more professional big bands. They hold the promise of a bright future for Scottish jazz, should that be the path they choose in the long term. With the guidance and mentorship of spirits like Rick Taylor, Duncan Lamont, Nikki Iles, and current directors Andrew Bain and Malcolm Edmonstone, the NYOS Jazz Orchestra is an incubator for excellence, both in the future, and, as this memorable Belfast concert demonstrated, in the here and now.