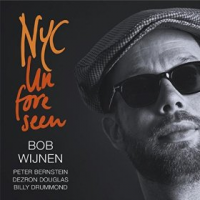 The first minute of Dutch pianist Bob Wijnen's debut album is very telling, but not because of what he does. Rather, it's what Wijnen doesn't do that sets these opening moments apart: Instead of announcing his arrival by hitting on all cylinders and showcasing himself, he hands this prime piece of real estate to drummer Billy Drummond, who solos in inimitable fashion over what's essentially a vamp with some slight alterations. Wijnen eventually gets to shine on that number, but not before drawing attention to one of his bandmates. Not many musicians would do such a thing at the outset of their first leader date, but Wijnen isn't most musicians.

While many jazz artists take the leader-on-record leap before they're really ready, Wijnen was in no rush. He waited until he was in his forties to forge ahead in that department. And were it not for a number of unanticipated meetings and encounters connected to a trip to New York, he probably would've waited even longer. But after receiving encouragement from renowned pianist-educator David Berkman following a lesson, having a chance to sit in with guitarist Peter Bernstein, and making contact with Grammy-nominated producer Ben Rubin, Wijnen realized the universe was telling him that it was high time to get into the studio.

The aptly named NYC Unforeseen finds Wijnen making his mark in relatively unostentatious fashion. He trades lead voice duties with Bernstein on a beautiful performance of Stevie Wonder's "If It's Magic," delivers a haunting rubato take on "The Look Of Love" with bassist Dezron Douglas, and bookends the balladic "E For Eye Opener" with introspective thoughts. Other highlights include "Baby Steps," Wijnen's nod to John Coltrane's "Giant Steps"; Bernstein's "Sublime Indifference," expertly driven by the swinging Douglas-Drummond engine; and "Bring It Together," a waltzing vehicle that highlights the melodically matched Bernstein and Wijnen pairing while also shining a light on the interesting ways that Drummond dissects the time. There's nothing here that will bowl the listener over, but everything sounds terrific. NYC Unforeseen is delivered with unforced confidence, reflecting, no doubt, the very nature of its creator. Albums like this are often overlooked, but they shouldn't be.

NYC Unforseen; Treehouse; The Look Of Love; Baby Steps; Sublime Indifference; E For Eye Opener; Bring It Together; If It's Magic; The Jellyfish Blues.