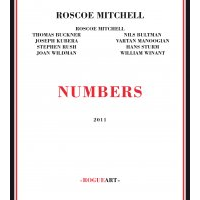 What's the difference between composition and improvisation once the music has been committed to disc? At that point even the wildest flights of fancy become fixed and immutable, able to be reheated and pored over at leisure. One difference may lie in the notation-defying musical characteristics integral to the finest improvisations: continual variation of tone and timbre and a high degree of rhythmic complexity. This distinction could apply to expositions by reeds or strings, but it becomes less pertinent for tempered instruments such as piano. Conversely, a written score allows a level of structural rigor and development of themes beyond all but the most gifted improviser. But matters become blurred when writing is at its most abstract. Perhaps it's ultimately a matter of intent: with scripted material there must be at least the hope of repeated performance, while spontaneously conceived outpourings are in and of the moment.

Those thoughts were prompted upon listening to Numbers, which features works by Art Ensemble of Chicago reedman Roscoe Mitchell played by interpreters of contemporary music. Mitchell himself, playing alto saxophone, appears on just one out of 13 tracks, recorded in multiple sessions over an eight year period from 2002. Even though, as Bill Shoemaker points out in his liners, little of the content would seem out of place individually in any Mitchell set list, the act of bringing these pieces together does make for a different experience. There is no indication as to whether the works are entirely through-composed or allow extemporization into their realization, but in spite of their abstraction, the consistent purity of tone and precision of delivery places them firmly in the contemporary new music camp.

Several cuts stand out. Two versions of "Bells for New Orleans" bookend the program, and a fuller rendition occurs mid-flow, lending a unity of form to the otherwise disparate collection. How the listener reacts to the three settings for e.e. cummings' poems for piano and voice will largely depend upon the response to Thomas Buckner's speech-like intonation. "WR/C 2A Opus 1," for the principal's acid-toned alto saxophone and William Winant's vibes, turns alternately reflective and inquiring. At best (as on "Sketches," where Hans Sturm's warmly lyrical bass sings in the cello register, and the three movements of "8/8/88," delivered staccato, but with rolling syncopated inflections by pianist Stephen Rush), there is sufficient overt melody or cadence to leaven the cerebral austerity which is the dominant characteristic of this album.