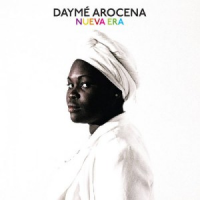 In one of the most interesting commerce and art collaborations of recent times, Cuba's famed rum Havana Club, with its Havana Cultura project, has joined forces with the local Cuban artist community to promote Cuban culture throughout the world. Covering a wide variety of musical styles and genres while at the same time adhering to Cuban roots, they are opening up venues for an ever growing stable of young musicians many of which are securing record contracts as a benefit of this exposure. Vocalist Daymé Arocena came up through this unique promotion concept and on Nueva Era, she displays the animated and rhythmic talent which is prevalent in contemporary Cuba.

Though just twenty two years of age, Arocena already has years of schooling and preparation behind her, with a stint as lead singer by the time she was fourteen. She recently was part of the all-female Jane Bunnett group Maqueque, where she did a superb job handling the lead vocalist position. Arocena hails from the Santeria religion and is entrenched in its invocations and ceremonies, as are many of Cuba's musicians' especially the rumberos. She opens with "Madres," an emotional tribute to Yemaya, which is the mother of water, motherhood, and rules the oceans.

Arocena shows her clever utilization of tempo on "Drama," and on the syncopated "Sin Empezar," she sings a lovers lament, with a mournful flugelhorn by Yelfris Valdes playing the humid response. Of her songs in English, "Dust," is well constructed in a rising cadence, and features superb backing by bassist Neil Charles, and pianist Rob Mitchell. While her strong suit is obviously singing in Spanish, she does a commendable job with her English lyrics, and the music is strong enough for her to lay back on.

"El Ruso," is an upbeat rumba number ̶ complete with a swinging Cuban ensemble ̶ dealing with her mother's attempt to learn Russian during that country's liaison with the island in the 1980's. "Nueva Era," winds up the record with spacy vocal textures, as Arocena conjures up the free spirit which she likes to inject into her music. She has obviously listened to a lot of jazz vocalists, which coupled with her innate Afro-Cuban sensibilities, makes for an interesting amalgamation. It is a solid debut effort, and though off to a good start, one is left to wonder what the future holds for this unique vocalist, with a whole life ahead of her to expand upon her talents.