By Marta Ramon
December 6, 2014
Sign in to view read count 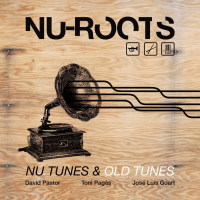 Nu-Roots multiplies itself with the potent Nu Tunes & Old Tunes. After six years working together, this acclaimed band has launched its third album, one of the most powerful recordings in the current Spanish jazz scene, and one that has definitely established the personality of the band.

The record is, in itself, an explosion of the knowledge and control that has accompanied the lives of the three great musicians in this influential group. Nu Roots has focused in exploring the possibilities that the electronics give to jazz music with elegance and audacity. The fusion in its tunes, which connects with styles like funk or hip hop grooves while incorporating a bossa nova feel, is expressed through an accurate contemporary language very much linked to the traditional jazz stream. This two-faced perspective—an approach to the past from the future—shapes the structure of the album's track list.

One of the main points of this wholesome work is the coherence reached by this trio—a kind of distinctive personality provided by the electronic sonority, the rhythmic conjugations and the superb sound of David Pastor's trumpet. The introductory effects of the opening "Visto desde arriba," mark an introduction to the Nu-Roots world: intense, changing rhythms led by versatile drummer Toni Pagès; a display of rich harmonies delivered by magnificent keyboardist José Luis Guart; and Pastor's brilliant metallic voice. The combination of catchy melodies—suitable to be sung—and electronic effects (scratching, echoes, delays) is the badge of the trio's original compositions. Irony is also another of Nu-Roots' underlying qualities. Its wicked streak shows itself with the intelligent mood that gives birth to tunes like "Take 15," and even while the lively rhythms are prominent there is time for calm with ballads like "In memoriam," which features a moving piano introduction.

Side B of the album is dedicated to four memorable and exquisitely selected jazz standards that have been dressed up with Nu-Roots' essence. For these tunes, the trio has counted on four special guests who boost the album's artistic credentials, leaving a sweet lasting taste: three singers, Gemma Abrié, Saphie Wells and Susana Sheiman; and guitarist Ximo Tebar, who performs a beautiful line together with Pastor in Leonard Bernstein's "Maria." Abriè's contribution is also remarkable, with vivacious singing and her own take on the lyrics to Antonio Carlos Jobim's "Aigües de Març." Each tune in this album has been carefully arranged to give to the music the sophisticated detail needed to enrich the final result: a meeting between the past and the future of jazz music—a fusion point which has been named Nu-Roots.