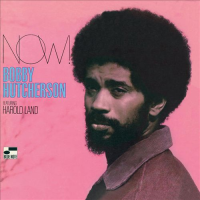 Few records capture and transcend their moment in time as definitively as Now!. Recorded in 1969, the disc emotionally echoes sentiments central to the black power movement of the day. The music is strong, passionate, sensitive, optimistic, and—like the struggle it heralded—timeless. The premier vibraphonist/composer of his generation, Bobby Hutcherson had already expanded the modern jazz vocabulary with his quintet of tenor saxophonist Harold Land, pianist Stanley Cowell (or Kenny Barron), bassist Herbie Lewis, and drummer Joe Chambers. On Now! the group, augmented by guitarist Wally Richardson, conguero Candido Camero, three female voices, and lead vocalist/lyricist Gene MacDaniels, creates a work with a popular sound and a powerful message.

The leader's opening "Slow Change is a clarion call for justice, with McDaniel's commanding voice soaring above the ensemble and Hutcherson and Land ringing out inspiring solos over the electrified rhythm section. Richardson's classical guitar and Candido's congas contribute a light delicate air to Joe Chambers' beautiful "Hello To The Wind. McDaniel begins his hopeful lyrics with the clear intonation of the lead on a Broadway stage and then improvises uninhibitedly, sounding at the times like a Moslem muezzin. Hutcherson's title track is a touching tone poem, a moving lament dedicated to the late bassist Albert Stinson. "The Creators, by Herbie Lewis, is a strangely ethereal piece, with a spacey Richardson guitar background grounded by Candido's insistent conga rhythm, over which the voices chant repetitively while Cowell, Hutcherson, and Land solo with reserved abandon. Land and McDaniel's "Black Heroes is a topical protest song lauding the race's champions of equality with the popular "Freedom Now message developed over rhythm changes.

The second part of the CD includes, as an important addendum, the live 1978 performance of "Slow Change, "Now, and "Hello To The Wind masterfully arranged by Dale Oehler for a concert by Hutcherson's group with saxophonist Manny Boyd, pianist George Cables, bassist James Leary, drummer Eddie Marshall, and percussionist Bobby Porter Hall with the Los Angeles Philharmonic Orchestra conducted by Calvin Simmons. Originally released on the overlooked LP Blue Note Meets the L.A. Philharmonic, the melodies maintain the strength and sensitivity of the original recordings, while taking on a new character that clearly confirms the importance of Hutcherson and Chambers as modern composers. The music may well be the best amalgamation of the jazz and classical idioms ever recorded.