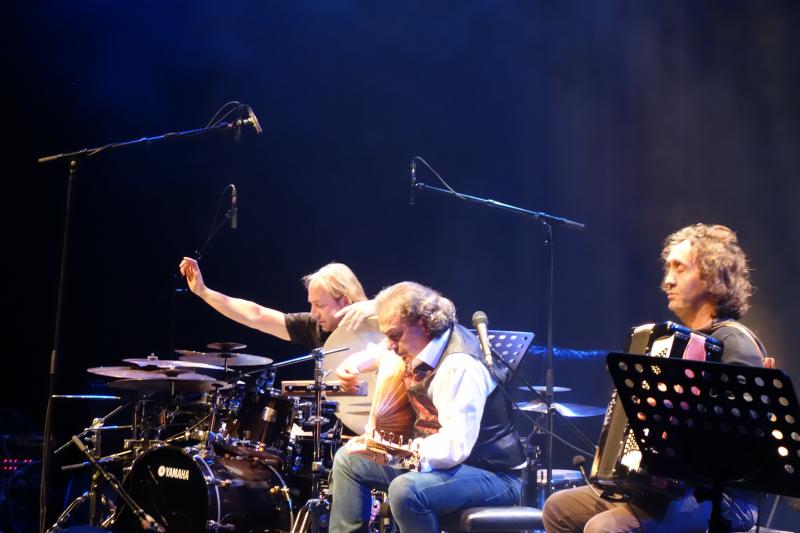 November Music is a yearly festival, founded in 1993. It is held in the medieval town of s'-Hertogenbosch, in the southeast part of The Netherlands. s'-Hertogenbosch (also called Den Bosch) was the hometown of well-known Dutch painter Jheronimus Bosch (1450-1516) who died 500 years ago.

It is a festival of contemporary music, new music in the broadest sense: in addition to the core of contemporary composers' music, there is room for neighboring branches, such as experimental pop, sound art/sound installations, non-Western music as well as jazz and free improvised music. This year, for the first time, November Music ran for 10 full days. It started with a premiering Jheronimus Bosch requiem performed by the Amsterdam Royal Concertgebouw Orchestra, the country's most prestigious orchestra. It closed with the trio of young jazz pianist Rembrandt Frerichs alongside the Cello8ctet Amsterdam and renowned Iranian Tar player Hossein Alizadeh.

November Music presents a broad range of genres and styles, colors and contexts at a great variety of locations spread across the picturesque old city. The festival visitor can discovers the old city, gets acquainted with its historic sites, and the festival at the same time offers great opportunity to navigate through various genres, fields, styles and approaches of music. All culminates in the so-called KunstmuziekRoute on Sunday, the festival's final day. From 11:30 p.m. to 6:00 p.m. visitors can walk past or bike along various performances varying in length from 30 to 75 minutes, at various places spread over the old city. A passe-partout ticket gives the visitor access to all these concerts.

Every visitor can plan her/his own route or follow one of the suggested thematic routes (or a combination thereof). The suggested thematic routes give an idea of the kind and variety of music in the bag: the Northern Jazz Route, the Dance+Music Route, The Jheronimus Bosch Route, the World Route, the Performance Route, the Première Route and the New Kids On the Block Route. Eventually the visitor will have to make decisions on the basis of musical preference, preference for certain venues and walkability. Although movability and border crossing are a key feature of the festival, its realization is mainly in the hand of the individual visitor. It depends greatly on the openness, curiosity, and effort of individual visitors to cross borders and make up a "good" combination out of plenty things on offer.

The old Verkade factory, the very center of the festival, is the only location to offer a greater variety of genres, styles and approaches. These are presented in parallel, non-confluent streams. The opportunity to cross over is clearly offered but in reality it can be observed that audiences hardly mix except perhaps for the performances and groups that are explicitly defined as cross-over acts in certain ways, like B'rock Baroque 360°, Bow Hammer Connection, Fausto Romitelli's "Professor Bad Trip" by Ensemble Klang, Stargaze & Nora Fischer, Bombay Bazaar of Jacob Ter Veldhuis or Steve Coleman Council of Balance+Doelen Ensemble.

This article focuses mainly on the jazz-related parts of the second weekend of this year's program. The concerts of upcoming young musician Jameszoo -his debut album is on Flying Lotus' label Brainfeeder -and the appearance of Swiss pianist Nik Bärtsch fell in the first week of the festival and are not covered.

Friday night presented among others a compact evening program entitled 'Colors of Improvisation,' comprising three configurations, two of them involving Dutch musicians: the two piano constellation of Dutch pianist Jeroen van Vliet and Swiss pianist Colin Vallon, the Dutch quartet of saxophonist Yuri Honing teaming up with Norwegian trumpeter Mathias Eick and finally the trio of Lebanese ûdist Rabih Abou-Khalil with his trio of American drummer Jarrod Cagwin and Italian accordionist Luciano Biondini. The 'Colors of Improvisation' frame has become a proven concept through many years of the festival. The term 'improvisation' has to be taken loosely as the improvisational nature and the improvised portion of the music offered varies to a greater extent from act to act and from year to year. This year's program contained mostly pre-structured music refined and shaped in the actual performance.

This time the guesting concept worked out brilliantly through the match of the Yuri Honing unit with Norwegian trumpeter Mathias Eick. The combination resulted in an attractive new quality of music surmounting the sum of the parts. The quartet comprising pianist Wolfert Brederode, bassist Guli Gudmundsson and drummer Joost Lijbaart acted and functioned as a brilliant backing group for Eick, and Eick added a brilliant touch to the quartet's own sound and pieces. The virtues of both parties were fully blooming and the combination of pieces of both parties worked out excellently—a felicitous match in all respects.

The piano-combination of Jeroen van Vliet and Colin Vallon was a different affair. A piano-duet is not the easiest thing to do. The musicians involved have to decide on an approach on how to proceed (alternating and expanding, complementing or confronting each other etc.) and find a way to realize and accomplish something communal. Operating in a safe framework, the meeting got a gentle, polite and profound workout with some nice accents.

The programming of Rabih Abou-Khalil, the first ûd-players to take the music of this Middle Eastern instrument more than 25 years ago to quite a different place in the Western world, was a remarkable move. The master made his appearance with a reduced version of his basic line-up. His longest standing partner in crime, renowned and beloved French tuba player Michel Godard, placed his position at disposal to pursue more his own path and projects with Eastern musicians/instruments. His brilliant and captivating solos will be sorely missed, but the caravan moves on. Since he has not been replaced, the other three musicians have to fill the vacant space in their own way.

The music -augmented not only by tapping techniques on the ûd but also by using the instrument like a slide guitar -was faster moving forward now, has become sharper, more pointed and more aggressive. It was three masters in full force, deep rhythm and high fly. Percussionist Jarrod Cagwin—whose work is nourished by manifold sources from Africa and Asia -has extended the range of his instruments and worked in multiple ways on Western drum set, frame drums and gongs. Just like last year when he was the steering and driving force of the Near-East-Up-North collaboration of Dutch jazz musicians with the renowned Dutch New Music Asko Schönberg Ensemble at November Music he again proved to be a grandmaster of quick and organic rhythm changes and percussive colors. Abou-Khalil and Cagwin, having collaborated for a period of 17 years, are meanwhile like the two sides of a coin. They are able to open and close an enormous range of rhythmical-thematic bouquets sliding and blazing in the elegant as well as furious sounds of Italian accordion master Luciano Biondini. In fact this unit with its members settling in Italy, France and Spain is an all-Mediterranean affair. This is still more emphasized by its strong Portuguese connection with extraordinary fado singer Ricardo Ribeiro (a week later the trio would perform for three subsequent nights at Teatro São Luiz in Lisbon with Ribeiro and Orquestra Metropolitana de Lisboa).

In France and Germany, accordionist Vincent Peirani (1980) and saxophonist Emile Parisien (1982) both are heavily in demand musicians with their own groups as well as in different combinations. The Living Being Quintet is Peirani's electric group comprising Emile Parisien (soprano sax), Tony Paeleman (rhodes), Julien Herné (bass guitar) and Yoann Serve (drums). Peirani as well as Parisien are both such versatile, dynamic and supreme musicians. They quickly dominate groups with the fireworks on their respective instruments. They are however never showcasing mere virtuosity. They fully engage in different moods spicing it with a good portion of humor. Their performance was a mixed affair. As usual it had great solo work but as a whole it was too much a rewind into fusion sound without giving it a special turn. The quality of amplification wasn't that conducive either. The concluding piece "Mutinerie" by Michel Portal, a musician of eminence in French jazz Peirani and Parisien play with regularly in a trio, however, was not affected by that all and unfolded in a quite enjoyable way.

Of a very different order was the performance of Steve Coleman's "Synovial Points," by the 6-piece Council of Balance together with the 11-piece Doelen Ensemble from Rotterdam. This constellation was similar to the 21-piece ensemble of the eponymous album on Pi Recordings from 2015. Performances were scheduled besides November Music also in Gent, Rotterdam, and finally in Bologna, Italy.

Whereas the original line-up consisted of experienced musicians familiar with (playing) Coleman's music, the musicians of the Doelen Ensembles where all novices who had to fix it in three days of common rehearsals with the Council under the direction of the clear and exacting Coleman himself. The Council comprised, besides Coleman himself, on altosax, Maria Grand (ts), Jonathan Finlayson (tr), Miles Okazaki (g), Anthony Tidd (el-bass), and Dan Weiss on drums.

The group performed the "Synovial Joints" suite with its four parts "Hand/Wrist," "Hip/Shoulder," "Torso" and "Head/Neck" and some other pieces of the original album like "Harmattan" (referring to the dusty Sahara trade winds) and "Tempest." The suite is inspired by the joints that bind our musculoskeletal system (as conceived in Chinese medicine).

In all pieces there are not only the overlapping cycles. Coleman also applies the concept of camouflage orchestration. In his own words: "I pay particular attention to how instrument sounds can be distributed so that they are perceived to be in in the foreground, middle ground and background, phasing them in and out so that they gradually come into and go out of focus." This was especially used in in the 'dusty' piece "Harmattan."