Dawes: Nothing Is Wrong 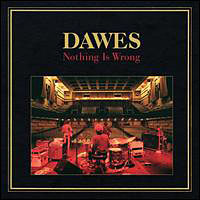 In the process of redefining rootsy rock and roll out from the West Coast, Dawes has had its profile heightened by association lately, with props from Jackson Browne in the pages of Rolling Stone and as accompanists for The Band's Robbie Robertson. But if the group's second album, Nothing Is Wrong, proves anything, it's that this quartet can stand on its own.

No question the group owes some obvious debts, but it's not for lack of ideas; rather, a well-defined sense of place as suggested on "Time Spent In Los Angeles." "If I Wanted Someone" exhibits a wry sense of self as well as a personal grasp of language, not to mention a unique combination of intangibles: the openhearted emotional approach of Jackson Browne on his first three albums; and the instrumental simplicity of Neil Young & Crazy Horse in its original incarnation.

"I just want you to make the days move easy," Dawes harmonizes, before Taylor Goldsmith's jagged electric guitar, Wylie Gelber's elemental bass and Griffin Goldsmith's drums punctuate the statement. It's all quiet at the beginning of "My Way Back of Home," each instrument entering softly, as the introspective story unfolds with confident honesty and nary a hint of self- consciousness.

Jonathan Wilson's production is nothing if not economical—the mix of voices and electric and acoustic instruments, plus mere touches of Tay Straithorn's keyboards amidst the guitars. The foursome plays in a style that understates clearly, so it's no coincidence that a piquant harmonica sounds after the first verse of "Coming Back to A Man"—a clever kiss-off of which a young Bob Dylan would be proud, yet bereft of the means-spiritedness to which The Bard was prone in his younger days. "Fire Away" has a bring it on! attitude, too.

Much of the material has a certain forlorn quality, but also an innate strength, the likes of which form the foundation of "So Well" and, even more so, "How Far We've Come." There's no self-pity in Dawes but rather a hard-earned positivism, reflected in the latter track's popping percussion, bouncing piano and high-spirited harmony vocals. This is a solid band much greater, perhaps, than the sum of its parts and there's a precocious self-awareness about it that suggests a group as familiar with despair as it is elation.

Thus it's no surprise that, after the solemnity of "Million Dollar Bill," reminiscent of Rick Danko or Richard Manuel at their most soulful, Dawes injects a cheerful singsong quality into a shuffle that suggests inspiration from The City of Angels rather than despair, while the closing "Little Bit of Everything" invokes the sardonic humor of the late great Warren Zevon.

Yet, it's not a fine line between the derivative in music and that personal style which arises from influences absorbed naturally. The members of Dawes are very much their own men.

Time Spent in Los Angeles; If I Wanted Someone; My Way Back Home; Coming Back to a Man; So Well; How Far We've Come; Fire Away; Moon in the Water; Million Dollar Bill; The Way You Laugh; A Little Bit of Everything