Julien Colarossi: Note to Self 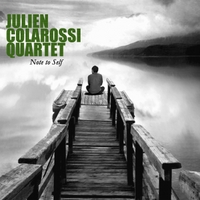 Since moving to Ireland in 2007, Italian guitarist Julien Colarossi has established himself as one of the busiest hands for hire on the Dublin jazz/contemporary music scene. He can be found in the band of singers Riona Sally Hartman and Edel Meade, and in the quintet Phisqa, whose eponymous debut fuses Peruvian rhythms—courtesy of drummer Cote Calmet—with modern jazz. He's a member of the 17-piece Hot House Big Band and also plays in Colours Afrobeat Foundation. Colarossi's debut as leader reflects his embrace of musical styles, not in any obviously eclectic manner, but rather in the extent of his vocabulary, the breadth of his musical ideas and in a compositional maturity that belies his 25 years.

The quartet with saxophonist Chris Engel has been together since 2011, however, Colarossi, bassist Barry Donohue and drummer Tommy Gray started out as a trio in 2008, so the empathy that clearly exists between the musicians is not surprising. Engel—equally adept on tenor, soprano and alto saxophone—carries the main melodic duties, with Colarossi slipping in and out of harmonic harness, and embellishing judiciously. This pattern is established on the impressive opener "Ricordandoti," where the leader's caressing touch on the intro and his more expansive and fluid playing at the song's middle points to a guitarist of notable emotional range.

Probing electric bass and a lively yet repetitive drum pattern propel the jaunty "Uncle Francle," with Colarossi's playing leaning towards the rockier end of the electric jazz guitar spectrum. On Engel's steamy jazz-funk number "David and Goliath" Colarossi's urban blues has a raw, searing edge. Yet whatever the idiom, Colarossi articulates every note in his unhurried, passionate manner. Gray's "Gold" is a charged slice of 1970s Miles Davis-inspired intensity, rhythmically driven, brooding and electrifying in turn. The only other non-Colarossi number is a delicate interpretation of Luis Enríquez Bacalov's romantic theme, "Il Postino," with Gray's mallets an original touch.

Colarrosi also treads softly on the very pretty "Effimera," with acoustic guitar and bass, purring saxophone and cajon joining in a gentle waltz. Colarossi and Donohue's delightfully weighted solos have the allure of the first stirrings of a summer romance. "Ruhie & Calle" begins life not a million miles away from smooth jazz-funk; sinewy guitar lines, fractured rhythms and some fairly free improvisation from Engel conspire to steer the music into another realm altogether, and once satiated, the quartet returns to the head. The episodic "Journey to Zero" covers wide emotional terrain, providing some of the most impassioned, straight ahead interplay of the set.

Colarossi again displays his credentials as a balladeer of some finesse on "Sincerity," a tune of touching lyricism carried by guitar and saxophone in tandem. The knotty narrative of "Dichotomy" features memorable statements from Engel and Donohue—the former's emotionally charged excursion, punctuated by honks and squeals, contrasting with the latter's flowing melodicism. The quartet reunites on the head, bowing out appropriately enough, as one voice.

A highly satisfying debut that hits the gut and touches the heart, Note to Self introduces a fine quartet and makes the case unequivocally for Colarossi as an emerging talent embarking on an exciting journey.

Title: Note to Self | Year Released: 2013 | Record Label: Self Produced