Benny Lackner Trio: Not the Same 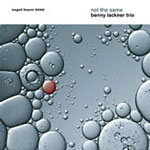 Pianist Benny Lackner's conception of the jazz trio places his music somewhere between the Bad Plus and Matthew Shipp's nu bop, with a smattering of Brad Mehldau in the crevices. His entirely original but vaguely familiar compositions serve as rest stops that space apart his trio's flashy, attention-grabbing covers.

He and his band work wonders with "Moanin' : Derek Nievergelt's tricked-out bass line and Lackner's electronica splats and keyboard smears should serve as inspiration for an entirely new approach to the Mingus songbook. Hendrix's "If Six Was Nine grabs you by the belt buckle before Lackner mixes up the mood with bent-note acoustic, wah-wah keyboard effects, and cold sprinkles of electric piano. And their textured takes on "99 Luftballons (electronic squiggles and a drum 'n' bass beat) and Nick Drake's "Riverman (dreamy and foreboding), separate the underlying melodies from the more familiar vocal lines, with piano defining the reinterpretations.

The pensiveness Lackner examines in Drake is a thread that runs through his own "Will it Matter and the title track, with crisp brush work from Robert Perkins, sure-footed bass and stinging keyboard. But this relative repose is offset by the controlled aggression of the drum 'n' bass feel he finds in "Nena" and revisits in "Umlaut, Perkins' beat stopping and starting while Nievergelt maintains a steady pulse.

Not the Same is beautifully sequenced, alternating aggression with reflection and contemporary sounds with nods to tradition. There is some precedent for the Benny Lackner Trio, and the leader has his influences, but overall this music has wit and a freshness that can be all too rare.

Visit Benny Lackner on the web.