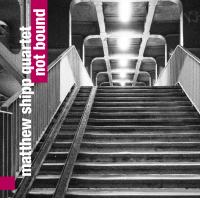 On Not Bound, pianist extraordinaire Matthew Shipp and his top-drawer rhythm section of Michael Bisio on bass and Whit Dickey on drums is joined by multi-instrumentalist Steve Carter in an exceptional tour de force of spontaneous music within a compositional framework.

Each of the five tracks offers unique and exciting lyricism. "Soul Secrets" begins with a cool piano and flute intro that leads to a rumble. Bisio is quite active on the bass, even under the unhurried opening pace. Carter's flute and Shipp's piano play off each other while Bisio busily works over his instrument. Suddenly the music jets forward. Dickey rotates across the drum set while Shipp provides syncopated accents beneath Carter's flowing melodies.

"Is" starts with Bisio's walking bass and Dickey's march-like accompaniment and then migrates into the theme. Carter's trumpet paves the way with long notes that are embellished by Shipp's flourishes.

Dickey launches the longest track of the album, "Totality," with a polyrhythmic drum solo that incorporates silent gaps between the drumming. Carter offers an arc of legato lyricism on both tenor and soprano sax. Shipp responds to Carter's lines—there's a back and forth between the two musicians. The group stretches out over Bisio's challenging up and down full throttle bass ruminations. Then, ever so subtly, the song migrates into an abstract bluesy swing. Bisio walks the bass line below it all and Shipp and Dickey slap a common refrain. At the 9:34 mark, Carter holds a legato note and Shipp echoes it on the piano. Then Bisio takes over with his free form bass—rumbling up and down the instrument's neck. The song concludes with strong group improvisation that roars like the waterfalls at Iguazu.

The album concludes with "This Coda." Shipp and Carter, this time on clarinet, open with a bluesy dreamy motif. About halfway through the track, Bisio and Dickey join in. The music begins to soar, gliding through mountain gorges and slipping past peaks. Shipp's playing echoes McCoy Tyner's rumbling style.

One can only hope that this is just the beginning for this quartet. All four gifted musicians provide exhilarating music. They listen carefully to each other and follow or lead as necessary. And the music? Dense. Complex. Lyrical. Harmonic. Challenging but never dominating.

Over the years, Matthew Shipp has remained true to his vision. No compromises. Just top-notch compositions that feature strong improvisational expeditions. Not Bound is an exemplary example.

Soul Secrets; Is; Not Bound; Totality; This Coda.