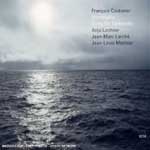 Nostalghia is a breathtaking and beautiful record that elicited some of the deepest emotional responses I have ever had to music—any music. Standing on its own, this recording does not demand that one even know who Andrei Tarkovsky was; but finding this out only deepens the musical experience, signifying the success of this project.

Pianist Francois Couturier has written music that is meant to evoke the emotions elicited by the films of his favorite director. A Russian through and through, Tarkovsky epitomized nostalgia, not just in the sense of expressing "longing for one's home," but a "global yearning for the wholeness of existence." Tarkovsky even argued, with total seriousness, that the Russians developed the concept!

Tarkovsky's films move very slowly and contain almost no music, creating a "soundtrack" of the physical objects being viewed. They are completely removed from most of the movies made today, with their cheap thrills and scores that telegraph events—and almost force the viewer to react. Instead, Tarkovsky would draw the patient viewer into his world almost totally by their eyes. The music that he did use was by Bach, Pergolesi or Purcell, and Couturier links back to the films by subtly evoking these and other classical composers.

Most of this music is composed, but it seems improvised because in large part it ignores time, and hence, the three purely improvisatory pieces do not stand out as such. While music and film inhabit separate worlds, they intersect through emotion—and, paradoxically, this powerful music produced reams of images for me, thus almost becoming a soundtrack to my own purely mental movie.

Treading the edge between classical and improvised music, these pieces have an almost tactile reality, and a good playback system projects a physical space. At times, the music is almost unbearably bleak and full of angst, at others it's absolutely terrifying. These dark emotions are balanced out by brighter ones, which nevertheless are surrounded by feelings of loneliness and melancholy.

And yet, despite the overall bleakness, sadness and longing, listening—just listening—made me feel totally alive, and for that I must thank producer Manfred Eicher, Francois Couturier and his group—and yes, Andrei Tarkovsky.