Grace Kelly: Every Road I Walked

BY DAN MCCLENAGHAN
March 1, 2007
Sign in to view read count 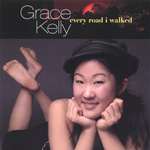 Singer, songwriter and alto saxophonist Grace Kelly's photograph—and her smiling face—grace the cover of her third release, Every Road I Walked. She's about as cute as a young woman can be, but at fourteen years of age (almost fifteen), you have to wonder about her artistic maturity and depth. A clue: she's wearing Phil Woods' hat, bestowed upon her, onstage, by the alto sax legend after she'd joined him to play "I'll Remember April" at the Pittsfield City Jazz Festival last October. That's how impressed he was with the upcoming artist.

The disc shows off Kelly's versatility, opening with the original title tune, a solid mid-tempo mainstream affair featuring her and trumpeter Christian Scott (another child prodigy) blowing in front of a piano/bass/drum rhythm line. It's an engaging song, with both horns taking solo turns. Kelly's tone has a Konitz feeling to it, warm with just a hint of fuzz around the edges, and her solo brims with heartfelt emotion; it's easy to see how she earned that hat.

Kelly has a self-assured sound on "I'll Remember April," and again, she solos with genuine verve. "East of the Sun (West of the Moon)" showcases her vocal talent. She employs a loose and insouciant delivery on this American Songbook classic, scatting joyfully, then throwing in another magical sax solo. Thelonious Monk's "'Round Midnight" gets a spare treatment—just Kelly and bassist John Lockwood. It's a highlight for a jazz purist: dark and moody, Kelly's horn sounding forelorn as she brings some real and fearless originality to the improvisation.

On "Samba de Veroa" Kelly handles the vocal duties—in English and Portugese—with a charmingly guileless slinkiness, sounding a bit breathy, with a bit more vocal animation than you usually hear in the samba mode. Beautiful; another highlight. Kelly leans to the pop side with "I Will," one of Paul McCartney's simpler, prettier melodies. On her original tune "Finish Line," she could be mistaken for Norah Jones'in terns of both voice and composition; and the bouncy "What if I Told You," another Kelly-penned tune, has a light, poppish feeling.

This fine set may lack some focus for purists of different stripes, with lighter pop sounds mixed in with jazz and Brazilian music—speaking of which, that voice and delivery beg for a full-on bossa CD, when Grace Kelly gets around to it. She's got a lot of music to make.

And about that hat: she wears it well.

Every Road I Walked; I'll Remember April; East of the Sun (West of the Moon); Some Other Time; I Will; Nowhere to Run; "Round Midnight; Filosophical Flying Fish; Samba de Verao (So Nice); Somewhere Over the Rainbow; Here's That Rainy Day; Finish Line; What If I Told You; Summertime.