By EDWARD BLANCO
April 2, 2016
Sign in to view read count 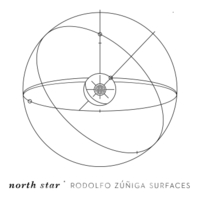 Costa Rican native and Miami-based jazz drummer, Rodolfo Zuniga is a world-class drummer who has performed with some of the best artists in the business, served as a sideman on various recordings and can be found performing throughout the South Florida area as a much in-demand drummer. As well as being a fixture in the areas vibrant and growing jazz scene, the drummer also performs throughout Central and South America as well as serving as an educator with Florida International University and Miami Dade College.

Zuniga and his Surfaces band, now presents his second album as leader with the brash and animated North Star, an eleven-piece program of modern jazz featuring original compositions from members of the group. Returning on this follow up recording are, saxophonist Dave Fernandez and bassist Eric England with Derek Fairholm replacing Clay Perry on the piano and Fender Rhodes.

While the program contains a primarily instrumental approach, there is one beautiful love ballad entitled "Loneliness Side" featuring Costa Rican-born vocalist and composer Karla Gutierrez voicing the soft spot of the album with assistance from the leader's haunting cymbal splashes and Fernandez's elegant tenor phrasings. The, "in your face" and lively "Calambur," opens up the music highlighting the sax man on soprano, Fairholm's strong work on the keys and the leader's furious pounding of the drums.

Two tracks that stand out from the beginning are, the saxophonist's original "Seasons" and the pianist's composition "Luminosity," not to be confused with Florian Hoefner's tune of the same name or with the jazz suite by Graham Collier, as this version swings and gyrates with all kinds of energy. The music warms up a bit on the delicate and enchanting Zuniga original "Mar Adentro" before returning to a more perky texture on the upbeat "Ambigram" featuring powerful drumming from the leader and the key man on the Fender Rhodes.

One can tell this is a drummer's album by sampling the introduction to "No Regrets," where Zuniga calls on the Hi-Hat, crash and ride cymbals, among other parts of the drum kit, for a splashy beginning to another high-octane burner evidenced by his aggressive solo moments here making this high-octane burner, a sure keeper of the recording. The title track closes out the music in stylish fashion offering a gentle slice of the modern jazz sound in capping off an attention-grabbing performance.

Calambur; Seasons; Luminosity; Mar Adentro; Ambigram; Loneliness Side; Escape From Guantanamo; No Regrets; Shift; Say What You Will; North Star.