BY DAN BILAWSKY
August 3, 2016
Sign in to view read count 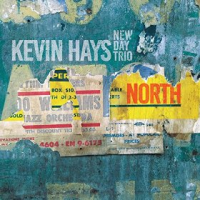 The second album from the Kevin Hays New Day Trio does and doesn't follow in its predecessor's footsteps. On one hand you can argue that it's completely different, as Hays doesn't sing on this one and there are no guests to speak of here; on the other, you can certainly opine that the overt lyricism in this music, forged through Hays' fingers and enhanced by the extremely interactive and empathetic team of bassist Rob Jost and drummer Greg Joseph, is a clear link to New Day (Sunnyside, 2015). In truth, both thought camps are probably right. Hays has managed to tinker with the fine balance of musical distinctiveness and directional mutability in his work for more than two decades, so why should things be any different with this group? Better to simply enjoy this to-die-for music than split hairs over album-to-album connectivity.

North's name was born through historical and personal ties for Hays, referencing everything from Harlem's musical riches to the pianist's former upstate New York home/sanctuary to a metaphorical ideal. It's an album built on a specific platform of thought, but it's not a work that fixes the compass on a single point. In fact, the variety is quite staggering when you start to think about it: A twisted and spiked take on Charlie Parker's "Scrapple From The Apple" sits beside a sorrowful-turned-scintillating "Elegia"; a Chilean folk pastoral, painted freely by Hays' piano and Jost's ukulele, serves as a prelude to an excitable 5/4 romp on "Violetta"; staid socializing leads toward waltzing wonders through classical borrowings on "Schumann's Chamisso"; and funky feelings rule the day on "Sweet Caroline"—a Hays original, not the Neil Diamond party warhorse. All of that sits within the incredibly gratifying first half of the album.

The five tracks that follow continue to speak to Hays' creativity, both as a composer, interpreter, and conceptualist. Leadbelly's "Where Did You Sleep" points both to its deep folk-blues spirit and sunnier aspirations, the swinging "All Things Are" emerges from the roots of the eternal "All The Things You Are" and grows in different directions, the title track is both a reflection and a respite, and "I'll Remember April" bounces along on a 6/8 carriage and gets a slightly darker and more intriguing coat of harmonic paint than what's customarily used. Then album's end cites day's beginning on the ever-evolving yet melodically moored "Morning." It's certainly a clear sendoff, but it also brings you back, inviting another listen each and every time.

Scrapple From The Apple; Elegia; Violetta; Schumann's Chamisso; Sweeet Caroline; Where Did You Sleep; All Things Are; North; I'll Remember April; Morning.