BY MARK SULLIVAN
August 1, 2015
Sign in to view read count 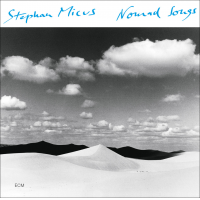 Multi-instrumentalist Stephan Micus has lived in a sound world of his own for many years. World Music usually means borrowing from disparate musical cultures and combining them. But Micus creates World Music for a world of his own creation. He adopts traditional instruments from all over the planet, then combines them in original compositions without referencing their original styles. As he says, "It makes little sense for a German to interpret Asian or African traditional music in public. This is the domain of the local musicians. I try to discover new ways to use these ancient instruments and play them together with instruments from foreign cultures, thus creating combinations that have never been performed before."

This album features two instruments new to Micus's world. The first is the Moroccan genbri, a lute covered with camel-skin, played by the Gnawa in Morocco. The deep sound of the genbri serves as a Black African bass instrument rather than playing the refined melodies of Arab lutes common in North Africa. It has a long history in World Music, dating back to recordings like Gnawa Music of Marrakesh: Night Spirit Masters (Axiom, 1991) and Hassan Hakmoun's Gift of the Gnawa (Flying Fish, 1991). The second is the ndingo, a lamellophone similar to the kalimba, used by the San people in Botswana. The program also includes a few variations of an exotic instrument called the "guitar," as well as a variety of reed flutes and some vocals.

Micus has often layered multiple instruments via multitracking (frequently several tracks of the same instrument), but this music is generally more direct, with many tunes involving only one or two tracks. That pattern is set with the opener "Everywhere, Nowhere," which introduces the ndingo and the genbri together, taking complementary upper and lower registers (repeated on "The Spring"). "Leila" is a more song-like piece, featuring steel-string guitar and suling (an Indonesian bamboo flute used in Gamelan ensembles). Out of context the suling could be a recorder or any wood flute, but it's a lovely sound. "The Promise" achieves a percussive sound by using the genbri plus two other lutes: the Chinese rewab and the Afghan rahbab. Micus adds the nay (an Egyptian reed flute) and vocals. He sings in an invented language of his own, which allows him to evoke emotion without any literal meaning. His rich baritone is reminiscent of Brendan Perry of Dead Can Dance.

"The Stars" is a twelve-string guitar solo, a gentle piece that evokes label-mate Ralph Towner, while "The Blessing" is the other solo piece, this time for voice. "The Feast" goes back into rhythmic territory, courtesy of three guitars and nay flute. "Laughing At Thunder" uses five genbri, but the title must be ironic, because the piece is not at all thunderous. "Sea of Grass" finds Micus playing two tin whistles simultaneously. The technique recalls Rahsaan Roland Kirk, but it's a gentle folksong-like melody. "The Dance" is a stately dance indeed, bringing together all of the plucked strings for a banjo-like effect. Finally, "Under the Chinar Trees" layers together three ndingo with Japanese shakuhachi flute and voice. The shakuhachi has a breathy vocal quality that makes it stand apart from the other reed flutes in the program.

Micus's music often tends towards the meditative, even ambient (although he does it with acoustic instruments). This album touches on that sound, but also includes a lot of music that is more rhythmic. It's a very approachable program with the ability to appeal to longtime fans and newcomers alike.