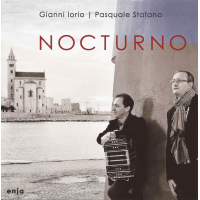 Nocturno pairs Italian bandoneon virtuoso Gianni Iorio with pianist Pasquale Stafano in a program consisting largely of Argentine tango that is sure to delight fans of the genre. Despite the title, sunshine abounds, although to be sure, there's enough late-night passion in the three Astor Piazzolla selections to satisfy those hungering for it. Of these, the opening "Verano Porteño" best displays the duo's phenomenal arranging skills. What begins as a dissonant conversation smooths out into a tightly knit fabric of synchronicity. The remaining Piazzolla tunes similarly wrestle with their own inner fire, unraveling in veritably cinematic textures.

Osvaldo Pugliese's "La Yumba" likewise plies a visual trade as it progresses toward a running finish. Other such "one-off" tracks —namely, "Milonga de mis amores" by Pedro Laurenz and "A fuego lento" by Horacio Salgàn—elicit some fierce playing from either musician. The former's precise harmonies and spirit feel as innate as can be, while the latter, despite its brevity, shows the duo at its most rhythmically expansive.

All of which makes the album's two solo turns stand out even more for their richness. Stafano's rendition of "El día que me quieras" by Carlos Gardell welcomes listeners as if to a modest yet satisfying meal, its flavor deepened by loving company. "Volver," by contrast, renders the bandoneon a solitary dancer who gestures however the music demands. Both tracks are picturesque in the most literal sense of the word.

Each musician also contributes an original composition. Where "Sagra d'estate" (Iorio) is soft and introspective, although with that same fire burning underneath, "La lantern di Phuket" (Stafano) is a balladic beauty with distinctly watery qualities.

In the CD booklet, a liner note by Oscar-winning composer Luis Bacalov makes it a point to stress the musicians' Italian-ness, by which he praises them for breaking assumptions that one must be from Argentina or Uruguay to play such music with any feeling of authenticity. Granted. But as I listen to Nocturno, I feel this is something of a lost point, because if musicians—and listeners, for that matter—have their hearts in the music, does it really matter from where the blood pumping through them originates? At its finest, music is a form of telepathy in that it allows us to live, if only briefly, in another place and time. That's what makes this music authentic. Not its ability to "recreate" a place, but to transport us there with such intensity that reality feels like a slap in the face when the last note ends.