Noa Fort: No World Between Us 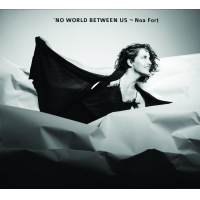 With No World Between Us, pianist, composer, and vocalist Noa Fort makes her leader debut in an album of comforting originality on all fronts. Her voice, in addition to its well-rounded intonation and emotional integrity, finds equal partnership in lyrics brimming with timeless themes. What separates her soul searching from those before her, however, is a suspension of self between past and future trajectories. By these she slows the here and now to a level at which it may be musically interpreted. Such languishing imbues her sidemen's contributions with animate force. Bassist Zack Lober works like a needle and thread throughout, while drummer Ronen Itzik provides a tasteful spectrum of colors to match. In combination with Fort's singing and pianism, their anchorage is secure and ineluctable.

From the opening strains of "Now is Our Time," in which Fort's unaccompanied voice embodies thematic suspension to its fullest, we find ourselves in the presence of a soul that has grown all the stronger for its bruises. The song's message of living in the moment is duly emphasized by rhythms of piano and hand-touched drums. Elemental balances blossom further in "Variations on Longing," of which a slick grounding from Lober evokes a film noir-ish quality. Such plays of light and shadow thrive also in "Mirrors" and "Winter Requiem." Both are session highlights for their self-realized lyrics, treasure-seeking pianism, and emotional transparency. In the latter's evocation of chill, notably through Itzik's cymbal work, one can almost visualize the breath vapors of every word.

Although Fort and her crew aren't averse to a dip in the blues ("Empty Space") or upping their groove quotient ("Unwritten Signs"), more than anything these mark the bandleader's apparent vision for music as a therapeutic art. Such songs as "Traveling (In Time and Space)," through their allegiance to movement, reinforce the uncertainty of identity, as when she sings about "trying so hard to become what I am," and prove that getting lost in a song isn't always the most enriching way to experience it.

For the last three numbers, she is joined by trumpeter Josh Deutsch, whose harmonies brilliantly underscore the otherwise discordant imagery of the title track. For "The Guest House," Fort sings a poem of Rumi (translated by Coleman Barks) and sets up a gorgeously pliant solo from Lober. And in "Just Wait," we find a sense of both closure and open- endedness, tying many of the album's threads together while leaving a few frayed for uncertain futures.

As the accompanying press release affirms, Fort tested these songs in the waters of live performance for a long time before committing them to disc. The wait has paid off with an effort that feels as familiar as a favorite sweater, warm enough to keep close as both literal and metaphorical winters continue to hold us in their grip.

Now is Our Time; Traveling (In Time and Space); Variations on Longing; Mirrors; Unwritten Signs; Empty Space; Winter Requiem; No World Between Us; The Guest House; Just Wait.

Title: No World Between Us | Year Released: 2018 | Record Label: Self Produced