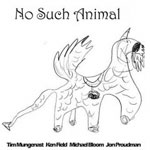 An underground summit meeting, this Beantown collective features heavy hitters from two of Boston's most notable instrumental avant-garde/rock ensembles. At the invitation of experimental guitarist Tim Mungenast, Birdsongs of the Mesozoic saxophonist Ken Field joined Cul De Sac drummer Jon Proudman and former Cul De Sac bassist Michael Bloom for a late-night quartet jam session. The results of this off-the-cuff meeting have been documented on the enigmatically titled No Such Animal.

Cul De Sac has collaborated with both iconoclastic folk guitarist John Fahey and Damo Suzuki, former vocalist of the seminal prog-rock experimental band Can. Finding the common ground between such divergent genres affirms Cul De Sac as one of today's finest purveyors of experimental psychedelic rock. Originally a post-Mission of Burma side-project, Birdsongs of the Mesozoic has evolved to forge prog rock, classical minimalism and improvisation into a singular sound in the ensuing two decades. Both ensembles dabble in accessible improvisational music with a healthy reliance on pop song melody and rhythm.

Despite the impromptu nature of this gathering, the end result is a session that fits in equally well with either band's catalog. There is a casual looseness to the rhythm section's rapport, with a dependence on melodic bass ostinatos and rubato drumming that veers from the impressionistic coloration of "Sitar-Tha" to the open-ended funk of "Luminous/Ominous." Field tends towards long tones and textural effects, rather than brassy showboating. Mungenast generally favors a methodical, cautious approach to his fretboard explorations within this psychedelic soundscape.

Although the improvising isn't quite as virtuosic as most advanced jazz soloing, the musicians' contributions fit in seamlessly with the mostly mellow, post-psychedelic jam session vibe. The most acute example of such casualness is exemplified by "The Iron Bell," with rock minimalism pushed to its limit. Dominated by occasional plucked harmonics and gentle taps on a gong, the tune flirts with Eno-esque ambience. The inverse can be found in the closing piece, which begins as a riotous free-form jam. "Mungulator Ritual" is markedly different from the bulk of the set, with its pulverizing rhythmic attack and heavily processed guitar thrashing; the quartet eventually locks into another vamp, but much more assertively than before.

A step above most jam band forays into free improvisation, No Such Animal is an example of democratic free-form jamming that can result from spontaneous meetings like this.

Visit Tim Mungenast and Ken Field on the web.