BY JACK BOWERS
January 1, 2008
Sign in to view read count 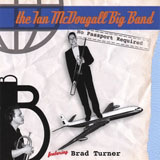 Ian McDougall's name may be unfamiliar to you, but the accomplished composer/arranger/trombonist certainly needs no introduction to jazz fans in Canada, where his long and impressive résumé includes half a dozen albums under his own name, more than double that number as lead trombonist/soloist with Rob McConnell's peerless Boss Brass, and another three as leader of the 'bone-centered Brass Connection. Even so, No Passport Required is an overdue benchmark, marking the first time that McDougall has led a big band in a program comprised entirely of his own compositions and arrangements.

Passport is a three-part suite inspired by McDougall's brief stopover in the U.K. (1960-61) as a member of the John Dankworth band. In those days, he recalls, as a member of the British Commonwealth, all that was required to enter and work in the U.K. was proof of citizenship, "which in my case was an Alberta birth certificate. No passport required! The twenty-eight-minute suite, on which McDougall and trumpeter Brad Turner are the stellar soloists, is thoroughly delightful, enlivened from start to finish by McDougall's warm memories of his first overseas adventure. "Heading Out describes musically the happiness and enthusiasm of a band on the road, ready and eager to perform for receptive audiences, "Heading Back the weariness felt when returning home in the early hours of the morning, and "O.S. (Overseas) Blues McDougall's blue mood in late 1961 when he became homesick and was ready to return to the west coast of Canada. The suite is melodically charming and rhythmically strong, with bassist Neil Swainson and drummer Craig Scott consistently impressive in their supporting roles.

Admirable as the suite is, it's gratifying to report that there's no letdown afterward, starting with "Lightly Turning, a gossamer theme based on Tennyson's phrase, "In the spring a young man's fancy lightly turns . . . Pianist Ron Johnston and guitarist Oliver Gannon are the soloists on "Turning, alto Campbell Ryga, trumpeter Derry Byrne, tenor Ross Taggart and trombonist Rod Murray on "Ian Leaps Out, a snappy salute to Lester Young based on the Gershwins' "I Got Rhythm. "Breen is a tasteful ballad for ensemble written in remembrance of McDougall's friend from Dankworth days, singer Bobby Breen, "Do You Mean It? a twelve-bar blues first recorded by the Boss Brass in 1996 on the album Even Canadians Get the Blues, with solos here by Johnston, alto Jack Stafford and trumpeter Don Clark.

Turner's lithe flugel is showcased again on "See Jay, an easygoing jazz waltz dedicated to the late Carl Jefferson, founder of Concord Jazz Records, while McDougall and tenor Phil Dwyer share solo honors on the heartwarming finale, "Greetings—from McSlide (a.k.a. McDougall) to McValve (his close friend and former employer, valve trombonist Rob McConnell). No Passport is a superb album by any measure, and McDougall, who easily makes his point without blowing a fuse, should consider doing this more often.

No Passport Required (Heading Out / Heading Back / O.S. Blues); Lightly Turning; Ian Leaps Out; Breen; Do You Mean It?; Sea Jay; Greetings--from McSlide to McValve.