By Dan Bilawsky
December 14, 2013
Sign in to view read count 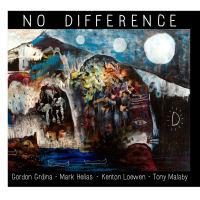 No Difference takes place at the crossroads of the known and unknown, expected and surprising, and fenced in and free. More importantly, it's an album built upon the bonds of shared experience. Each of the four musicians involved with this project can be paired off with at least one other in their respective backstories. Grdina and bassist Mark Helias play together every time the guitarist/oud master makes his way from his home base in Vancouver to New York; Helias and drummer Kenton Loewen, who frequently works with Grdina, made a musical connection during those aforementioned visits and bonded over their love for drummer Ed Blackwell, who was a major influence on Loewen and a band mate of Helias' for quite some time; and saxophonist Tony Malaby forged a deep musical relationship with Helias in the aptly named Open Loose trio. These linear relationships contribute to the aspects of familiarity that play out between these parties at times, but newness also has its day. This is, after all, the first time all four men have joined forces as one.

When these individuals get comfortable together, the results are striking. At times, they show tremendous control and patience in shaping the music ("The Throes"), but they're just as likely to allow a sense of abandon to overtake the proceedings ("Leisure Park"). They know how to color within the lines, but they often have more fun doing just the opposite; "Leisure Park" and "Fierce Point," a whacked-out fun house scene with nightmarish qualities, are the proof. Malaby, more often than not, is the pot-stirrer in these exploratory episodes, egging everybody else on and skronking in his inimitable fashion. "Visceral Voices," the closing track on the album, finally rectifies the imbalance between control and chaos. Loewen's love of Blackwell comes through in his playing, as he provides a brilliantly jittery swing foundation, Grdina plays the brooding artist, Helias bounces away at the bottom, and Malaby's dark and dangerous saxophone work steals the show. The promise of this four-way partnership is fulfilled in these seven-and-a-half minutes.

The remaining tracks, which make up more than half the album, are duo creations that highlight the rapport between Grdina and Helias. Arabian flavors and a sense of mystery come through on "Hope In Being" and "Fast Times," the heart wins out on "Nayeli Joon," and "Limbo" sits right where its title suggests. "Cluster," the oddest of them all, goes down into the depths, where darkness, self-doubt and uncertainty prevail. The sound of tortured souls seems to cry out from nowhere here.

Grdina and Helias share a belief in the power of expression through sound, whether simple or complex, and they're not alone. Malaby and Loewen are two like-minded souls who also clearly subscribe to that tenet. These four, as individuals and a team, are afraid of nothing and open to everything.