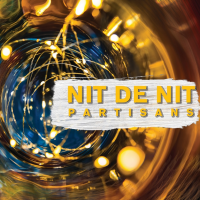 Definitely not to be confused with the Welsh punk rock group of the same name (albeit with the added definite article in the title), Partisans have been around for well over two decades. Their debut album Partisans was released jointly under Julian Siegel and Phil Robson's names on the EFZ label in 1997. Since then, as Partisans, they've released Sourpuss (2000), Max (2005) and By Proxy (2009) on the Babel label and more recently, Swamp (2014) on Whirlwind Recordings.

Partisans' two frontmen and primary composers have been leaders in their respective fields for over two decades. Siegel teaches jazz saxophone at the Royal Academy of Music and Robson is a visiting professor at Trinity College Of Music, Guildhall School Of Music & Drama and The Royal Academy Of Music. He was elected an Honorary Associate of the RAM in 2015. Both have released several albums under their own names; Siegel's last was Vista (Whirlwind, 2018) and Robson's was The Cut Off Point (Whirlwind, 2015). As for the so-called backline, Thad Kelly on bass and drummer Gene Calderazzo were participating members of the group from the very start, and are two of the best jazz musicians in the UK. But they'd have to be because Partisans' repertoire is not facile fare.

This set, recorded live at the Vortex Jazz Club, London on September 25 and 26, 2018 revisits some of Partisans' old, yet still very vital, numbers, all executed with astounding vibrancy and flair. As on the studio album Max, the set kicks off with a few seconds of Charlie Parker's "Klact-Oveeseds-Tene Intro" and immediately seguesinto Siegel's paean to drummer Max Roach, "Max." The title track, originally heard on Sourpuss, fairly whizzes along, particularly in the Mahavishnu-esque ensemble sections. David Bowie's "John, I'm Only Dancing," first heard on Max, begins in electric Miles Davis mood, Robson emulating the muddy wah-wah effect John McLaughlin used on Live Evil, but later resorts to overdriven guitar to execute a take-no-prisoners solo. "3.15 (On The Dot)" contains more Milesian reminiscences with Siegel now on bass clarinet, eerily evoking Bitches Brew (Columbia, 1970). But Partisans trademark electro-post-bop is actually nearer to later period Ornette Coleman than Miles Davis. It's also not dissimilar to the frenetic urgency of M-Base.

Intriguingly, "The Overthink" oscillates between industrial heaviness, underpinned by Kelly's solid bass guitar and Siegel's subtle tenor-led lyricism. Robson's lithe contribution on "EG" is a veritable master class in dexterity, Similarly, Siegel's protean reeds skills, in this instance on swirling soprano, match Robson's fleet-footed guitar work line for line. The slinky rhythm of "Pork Scratching," provided by Calderrazo's restrained, insistent beat, is countered by the smouldering riffiness of the closer, "Last Chance" (from Max), replete with added piquancy courtesy of Siegel's sultry bass clarinet. It seems that over the course of nearly a quarter of a century, Partisans have lost none of their magic, indeed judging by this album, the magic seems to have burgeoned. This is compelling music, and some of the very best to be heard anywhere on the planet.