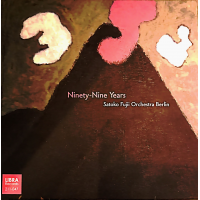 Three months and three releases into the Satoko Fujii's sixtieth birthday project, the eclectic composer keeps the mix from her musical arsenal, a varied and intriguing monthly adventure. Ninety-Nine Years follows her 2018 Libra releases Solo and Kaze's Atody Man and here Fujii calls out her larger company of Orchestra Berlin. Of her five distinct orchestras, Berlin is the most recently formed having debuted on Libra in 2015 with Ichigo Ichie. The ensemble from the maiden release remains intact with the exception of trumpeter Lina Allemano who replaces Nikolaus Neuser and absence of guitarist Kazuhisa Uchihashi.

Ninety-Nine Years title is Fujii's tribute to the late mother of her husband and musical partner Natsuki Tamura. "Unexpected Incident" opens the album and references the government response to Japan's 2011 Fukushima nuclear accident. It's a topic close to Fujii's heart and one that she had previously addressed with a full-album suite on Fukushima (Libra, 2017) with her all-star Orchestra New York. The lengthy piece builds as the frenetic pace of the drums sets up a wailing battle between tenor saxophonist Matthias Schubert and trombonist Matthias Muller.

Bassist Jan Roder's solo ushers in the title track. Paulina 0wczarek's mournful baritone saxophone stands apart on much of the piece and gives it a sense of empathy. "On the Way" changes direction and allows Tamura the opportunity to pour on his trademark eccentricities after some lengthy percussion experimentation. Schubert's own inventiveness is a close match for Tamura's as demonstrated with his blistering performance on "Oops." "Follow the Idea" closes Ninety-Nine Years with the most abstract and raucous piece on the album.

Fujii, as a composer, often emerges out of near silence, patiently building her ideas like muscle and tissue; unflinching and animated, her concepts never wear out their welcome. Her landscapes are deceptive—pastoral and manicured one minute and filled with land mines, the next. Her exceptional orchestra is capable of transforming acoustic instruments into anonymous paraphernalia. Ninety-Nine Years is thought-provoking listening to be sure; continually absorbing and unlike anything else. With nine more albums to come, the sixtieth birthday project is a listener's gift that keeps on giving.