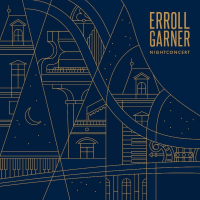 The lights dimmed, a spotlight illuminated the stage, and on Saturday November 7, 1964, Erroll Garner, wearing a black tuxedo and almost certainly one of his frequent grins, walked on stage to play piano to an audience of over 2,000 people at the Concertgebouw in Amsterdam. The excitement was palpable, and the crowd roared and clapped with every deft turn he made. Garner didn't read music on a sheet, he never learned. He read his audience. When they were with him, clinging to every note, he sensed it and it showed in his face.

Far from an intimate club venue, this was a packed concert hall, and listening to the legendary pianist's latest unearthed, previously unreleased treasure, titled Nightconcert offers a sense of being in the audience. A sense of time and place. Garner's trademark grunts and growls are mostly drowned out by the music and the crowd, who applaud after his improvised introductions to each song. Joined by drummer Kelly Martin and bassist Eddie Calhoun (the former played with him during his most famous release, 1955's Columbia album Concert By the Sea), Garner races and rollicks through 16 songs in just 80 minutes with the boundless energy he was known for.

They do slow down a couple times, notably for the ballads "Theme From A New Kind of Love (All Yours)" and "No More Shadows," both Garner originals. The performance winds down with a rendition of the George Gershwin classic "'S Wonderful," finishing with a less than one-minute long "Thanks for the Memory," before thunderous applause from an audience which has shared his energy into the early hours of Sunday morning.

Worth noting is that the physical releases of Nightconcert come in a matte midnight blue case with bright gold artwork portraying a mosaic rendition of the Concertgebouw. Inside is a color booklet with brief essays and a full listing of each track with song descriptions by pianist Christian Sands, who serves as co-producer on the album. Nightconcert is the third release of mostly unheard material in the past four years, and the audio quality is notably better than the remastered Concert By The Sea, but isn't absolutely perfect, particularly Kelly Martin, whose drums sound just a bit farther off from the microphone. This however, is not particularly surprising given the size of the concert hall, and fails to detract much from the album's overall enjoyment. Especially since Garner's piano sounds crisp and clear throughout what is yet another virtuoso performance.

Where Or When; Easy To Love; On Green Dolphin Street; Theme From “A New Kind Of Love” (All Yours); Night And Day; Cheek To Cheek; My Funny Valentine; Gypsy In My Soul; That Amsterdam Swing; Over The Rainbow; What Is This Thing Called Love; Laura; When Your Lover Has Gone; No More Shadows; S'Wonderful; Thanks For The Memory.