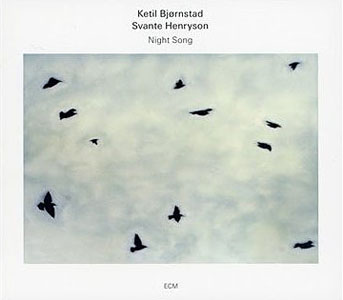 The relative merits of technical aptitude, when it comes to music, are often hotly debated. Surely possessing more comprehensive and masterful control over the vocabulary of music would be a plus; how, then, can a raw, unschooled bluesman like Robert Johnson resonate in ways that more schooled artists sometimes cannot? Proficiency, then, is really only an acquired tool, a means, a vernacular; and while it's true that there are those musicians who struggle and accomplish much, equally, there are those lucky few for whom the music comes more naturally. The ease with which Franz Schubert created a substantive body of work that still rings true nearly two centuries after the Austrian composer's death at the age of 31, is the stuff of legend, and while it might be hubris to suggest, at this point, that Ketil Bjørnstad will be remembered the same way, the Norwegian pianist's career certainly bears comparison in its seemingly effortless prolificacy. Night Song may be only his ninth album for ECM in eighteen years, but Bjørnstad has, in fact, released more than sixty recordings since 1973, along with over twenty novels, a number of poetry collections and plays.

When Bjørnstad and cellist Svante Henryson performed Night Songs at Kongsberg Jazz Festival 2010, there was an unmistakable thread between this music and Schubert—rooted in a similar romantic linearity, but imbued with an icy melancholy that comes from living amidst the craggier and more rugged climes of Scandinavia. While Bjørnstad is, perhaps, better-known for his association with American cellist David Darling on earlier ECM discs like The Sea (1995) and Epigraphs (2000), his relationship with Henryson dates back a good few years, even if Night Songs represents their first recording together.

Defined by stark simplicity and a quiet majesty powered more by calm than energy, both Bjørnstad and Henryson value the purity of every note, and the resultant overtones when permitted decay to their inevitable conclusion. Neither seems compelled to speak more than is absolutely necessary, their discretion and unfailing choices defining qualities that allow Night Song's 16 original compositions (all but four by Bjørnstad) no shortage of interpretive unpredictability, despite never losing sight of—or respect for—the essence of each piece. Whether it's Henryson's sometimes epigrammatic ideation—an arco swelling out of the space between Bjørnstad's chords, only to disappear as quickly as it appeared, on one of two versions of the title track that bookends the 77-minute disc—or a more serpentine melodism, on the quietly majestic "Melting Ice," where his controlled bow evokes harmonics with as acute precision as the plangent pizzicati that follow, the cellist's selfless approach to exploration is matched by Bjørnstad, whose touch has never been more delicate or assured, his ability to expand and contract time never so intuitive or organic.

That both Night Song and Remembrance (Bjørnstad's 2010 ECM date with saxophonist Tore Brunborg and drummer Jon Christensen) stand as career highlights amongst his extensive discography only suggests even greater things ahead for the approaching sexagenarian. As for the decade-younger Henryson, hopefully the broader availability of Night Song will place him on the same wider radar as his more internationally acclaimed partner.