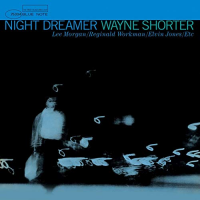 By the time he made this recording, a few short months before he was to join Miles Davis' groundbreaking second quintet, saxophonist Wayne Shorter had already earned a reputation as a player combining heady intellectualism with a more visceral approach as a member of Art Blakey's Jazz Messengers. He'd also released four records for the Vee-Jay label that demonstrated how, while he'd learned a great deal with Blakey, he was developing his own voice, albeit still in the hard bop mode of his bandleader.

But by the time Shorter recorded Night Dreamer, his first date for Blue Note, he'd gone through something of a change. With compositions that were sparer, and an equally economical playing style in direct contrast to John Coltrane's, Night Dreamer signalled a change without completely neglecting his hard bop roots. Despite a more cerebral method, Night Dreamer still swings hard, something that would hardly be a constant when he joined up with Miles a few months later.

But, then again, how could any recording with the rhythm section of pianist McCoy Tyner, bassist Reggie Workman, and drummer Elvin Jones not swing? It's of particular note that the three had backed Coltrane as a unit until Workman was permanently replaced by Jimmy Garrison some time in '61. Coltrane would eventually push things so far out that Jones and Tyner would ultimately resign in '65, and it's clear by their performance on Night Dreamer that neither would have been comfortable in the freer style that Coltrane was moving towards.

Meanwhile, Night Dreamer, which also features Blakey band mate Lee Morgan on trumpet, gives Shorter the opportunity to shift his focus away from the more straightforward hard bop of his early recordings, and towards a more open post bop sensibility. While harmonically challenging—as most of Shorter's compositions were and still are to this day—these six Shorter compositions adhered more rigidly to form than either his future work with Miles or his Blue Note recordings from later in the decade.

And so, in a way, Night Dreamer is a transitional record, but a classic one nonetheless. While Shorter remained within more traditional boundaries, his sparer style, with every note considered and yet sounding unconsidered, was beginning to emerge. And while he would use the same rhythm section on the followup Ju-Ju, recorded four months later, by the end of '64 he would be using Miles bandmates pianist Herbie Hancock and bassist Ron Carter for Night Dreamer and, while continuing his approach towards even richer harmonic depth, would also begin a shift towards greater abstraction.

As always, this Rudy van Gelder remaster edition brings greater life to the album, and it shows just how beautifully recorded it was in the first place, now that its nuances are more evident. While replacing one's entire collection with remasters is of questionable worth, these RVG Editions certainly make a strong case for doing so with one's Blue Note catalogue.