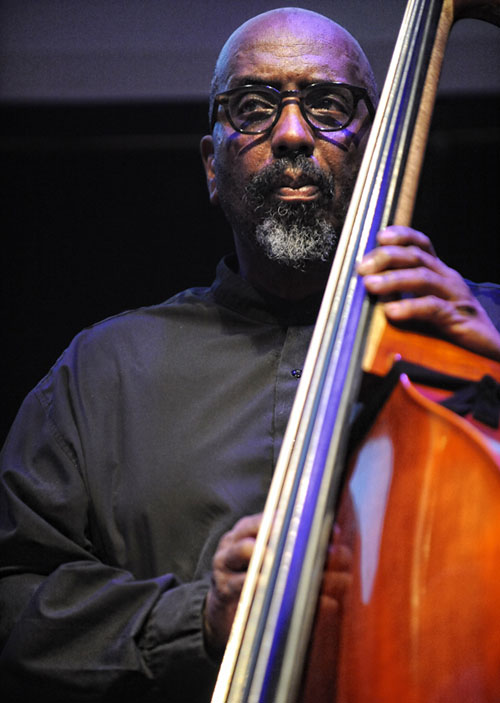 slideshow
On August 21, AUM Fidelity will release For Those Who Are, Still—a 3CD box set of new and previously unissued works from world-renowned composer-bassist William Parker. This set is comprised of four distinctly compelling long-form works—Parker's first composition written for symphony orchestra performance; a commissioned piece for a standing new music ensemble; a “chamber-jazz" song series for voice / soprano sax / piano / bass; a composition created specifically for a particularly diverse Parker assemblage in Universal Tonality mode. The four works are linked by a focus on & greater adherence to William Parker’s written compositions; the depth and breadth of the resultant performances is astonishing. As ever in his four+ decades of profound output, improvisation of a very high order is a natural part and parcel of these multifarious expositions.

The set begins with a work of great synesthetic capacity. For Fannie Lou Hamer is a stunning homage to this indefatigable American civil rights leader. This piece was commissioned by The Kitchen, NYC, for performance by their 10-piece house band in the Kitchen House Blend series. William wrote words to accompany his music, and included singer Leena Conquest to the assembly. As is amply demonstrated here, and in her work with Parker's Raining On The Moon & The Inside Songs of Curtis Mayfield projects, Conquest is a particularly gifted and tuned-in performer of his lyrics. Her enunciation and soulful contralto does justice to his unsparing and luminous poetry. Leena is also featured here on Vermeer, a studio session dedicated to song-form, with Darryl Foster (soprano & tenor sax), Eri Yamamoto (piano) and Parker (bass & hocchiku).

Red Giraffe With Dreadlocks is a long-form work written specifically for the particular group of talents who performed it; its staging made possible by the central location of Paris, France. Joining Parker (bass) and long-time compatriots Cooper-Moore (piano), Hamid Drake (drums), Rob Brown (alto sax) are Senegalese griot Mola Sylla, classically-trained Indian singer Sangeeta Bandyopadhyay, Dutch bass saxophonist Klaas Hekman, and double-reed master Bill Cole. Red Giraffe.. is yet another beautiful manifestation of a concept to which Parker has often returned. Universal tonality, as he wrote in the sleeve notes accompanying the album, Double Sunrise Over Neptune, “is based off of the idea that all sounds like human beings come from the same place. All sound has a heartbeat and breathes the same as each human being. Some sounds are born in Africa; others are born in Asia, Europe, Australia or America. These sounds pass through certain human beings. We don't invent sounds, we are allowed to encounter them; we don't own them, they existed before we were born and will be here after we are gone.”

Ceremonies For Those Who Are Still marks the momentous occasion of William Parker's first work composed for symphony orchestra. It was commissioned by Poland's National Forum of Music for premiere performance at the Jazztopad Festival in Wroclaw, and is performed by the NFM Symphony Orchestra (conductor, Jan Jakub Bokun) together with the eight principals of the NFM Choir. Charles Gayle (tenor & soprano saxophones, piano), William Parker (bass, doson ngoni, bamboo flutes), and Mike Reed (drums) improvise both within the composition itself, and as a trio on the long-form prelude, Escapade For Sonny. Ceremonies For Those Who Are Still is dedicated to Rustam “Roost” Abdullaev, a vibrant young Muscovite bassist whose creative life energy inspired Parker greatly on their several meetings.

William Parker's previous release was the 8-CD box set, Wood Flute Songs: Anthology / Live 2006–2012—a monumental body of work duly proclaimed a 5-Star Masterpiece by DownBeat and chosen by The Wire as the #1 Archive Release of the Year. Succinctly described in JazzTimes: “This box is a magnificent document that captures one of jazz's greatest, most prolific and most versatile bandleaders at the height of his powers, demonstrating a stunning range of creativity with a superb cast of musicians."

This new 3CD box set – For Those Who Are, Still – contains 3.5 hours of precious music; each of the CD sleeves (and the box cover) feature commissioned paintings by gifted young artist Douglas Arnold. The accompanying 24pg. booklet contains extensive notes by Philip Clark (The Wire, et al.), William Parker’s lyrics, and further key visual artwork. The deluxe box will be published in a limited first edition of 1500 copies. The total music and artwork will also be available digitally for download. The elementally unifying thread of this whole set is life and death itself, with the exhortation to take example from those who have lived life with full and un-ending compassion for other human beings; appreciating that we all live and die together and the best path forward is through peace, with kindness and respect mutually allocated from all, to all. Inherent in the title, this is music for living: For Those Who Are, Still.